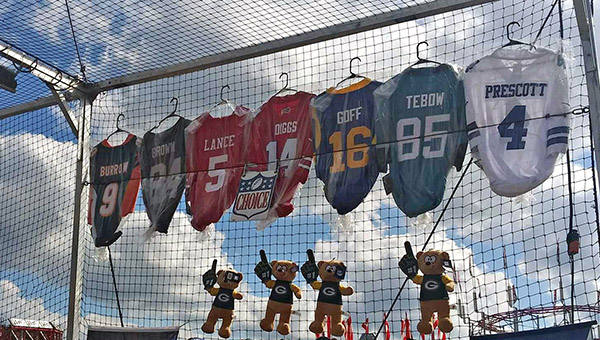 A selection of jerseys hangs on a fence at a game booth at the Mississippi State Fair in Jackson last week. (Ernest Bowker/The Vicksburg Post)

Ten or 12 years ago, one of my favorite websites to frequent was called StraightCashHomey.net.

It was a remarkable online sports scavenger hunt dedicated to the pursuit of documenting obscure or bizarre jerseys seen in the wild. People would send in photos of other fans wearing jerseys of marginal players, or those who had brief, forgettable or infamous stints with the team represented, and each one had a funny caption.

For example, thousands of Saints fans might wear a No. 9 Drew Brees jersey. StraightCashHomey.net celebrated the one guy in the Superdome with a No. 42 for former fullback Zach Line, or the person in the upper deck still clinging to Aaron Brooks’ No. 2 in 2021.

The site shut down in 2011 and lives on only in archive form now, but its spirit is alive and well with me. Every time I see a jersey that is remarkably out of place I make a note of it, and Central Mississippi has offered up more than its share of jerseys that could have made StraightCashHomey.net proud.

I’ve spotted a Tim Couch Cleveland Browns jersey at a football game, and a Carson Palmer Raiders jersey at a basketball game, both many years after either was relevant or current.

At the Mississippi state fair, waiting for some cotton candy, was a teenager rocking the No. 46 of longtime San Francisco Giants pitcher Kirk Rueter. Rueter had a solid 13-year career in the majors, but was never an all-star and has no connection to our state. Why a teenager was wearing his jersey more than a decade after he retired in 2005 will forever be a mystery.

I couldn’t fully verify it since the person was on the other side of the gym, but I’m pretty sure I once saw a Randy Moss No. 84 Titans jersey at a Warren Central basketball game. Moss was traded to the Titans in 2010, halfway through the season and near the end of his career. It blew my mind that there was enough time to produce that jersey, or why anyone would honor that particular era of Moss’ great career.

I once stalked a guy in Wal-Mart for 10 minutes to grab a candid photo of his Keyshawn Johnson Carolina Panthers jersey. Johnson played one late-career season with the Panthers and was far from the star he had once been. Like the Moss Titans jersey, it stunned me that anyone would commemorate it.

And then this week I found the Holy Grail of obscure jerseys, a veritable shrine to the fun and nonsense StraightCashHomey.net once celebrated.

A game booth at the Mississippi State Fair had NFL jerseys as a top prize. Seven of them, in all, were hanging from the top of a fence. Some made sense, like the No. 9 Joe Burrow Bengals jersey and the white No. 4 of Dallas Cowboys quarterback and former Mississippi State star Dak Prescott on either end. It was in between those two where the fun existed.

Next to the Burrow jersey was a No. 84 Antonio Brown Raiders jersey. The star receiver was infamously traded to the Raiders during the 2019 offseason and malcontented his way into being released without playing a game for them.

A couple of slots down was the No. 16 of Detroit Lions quarterback Jared Goff. This, though, had Goff’s name and number on the jersey of his former team the Los Angeles Rams. He was traded in March. It was also the 2019 version of the Rams’ jerseys. They changed them in 2020.

The last treasure was a No. 85 Tim Tebow jersey from his brief stint with the Jacksonville Jaguars. Tebow is a beloved sports figure, but his best football was obviously well behind him when he tried to make an ill-fated comeback this year. He was cut in August, halfway through the preseason.

Seeing an outdated jersey for a mediocre quarterback and two others for players who never played a regular-season game for those teams warmed my heart. Seeing them not just worn, but offered as prizes, brought a huge smile to my face.

The ancestral home of wacky jerseys might be long gone, but its spirit will live on forever.