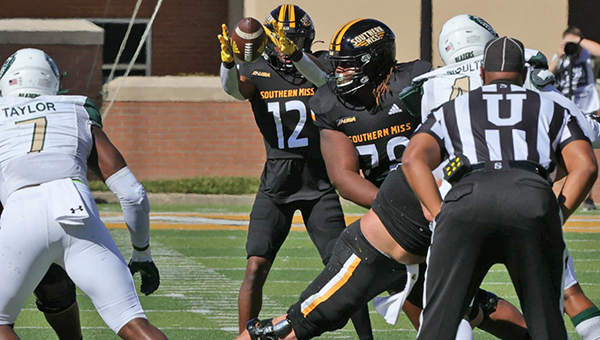 1
The penultimate week of the MAIS regular season brought the association’s playoff picture into sharper focus. It’s still not clear where every team will land on the bracket, but for several of those in the Vicksburg area what they’ll need to do in their finales is at least a bit clearer.

St. Aloysius is one of four teams — along with North Delta, Oak Hill Academy and Wayne Academy — vying for the 12th and final spot in the Class 4A bracket.

All four teams are trying to get in as wild cards, which means their power point rating will determine who qualifies. The MAIS power point formula awards points for each team’s victories, those of their opponents, and a set amount for each game to come up with a total that is then divided by the number of games played to come up with an average. The average is used to set the field.

If St. Al (2-7) upsets Tri-County (8-1) on Friday, it would vault the other three and clinch a berth regardless of most other results. It could even get as high as the No. 11 seed. If all four teams lose, St. Al would also get in.

There are two big obstacles in the Flashes’ way, however.

North Delta (3-6) plays struggling Lee Academy (1-8) and would get in with a win and a St. Al loss.
Wayne Academy (4-5), meanwhile, plays Brookhaven Academy (7-2) and can not only get into the playoffs with a victory but potentially win the District 4-4A championship. That would vault Wayne all the way to the No. 4 seed, move everyone else down a spot, and knock out the other teams vying for the 12th seed.

Meanwhile, in Class 2A, Porter’s Chapel Academy (6-3) has clinched a playoff berth and most likely a home game no matter its outcome against Tallulah Academy (5-4) on Friday.

PCA is currently the No. 6 seed, with an 18.667 power point average. It is unlikely to catch Claiborne Academy (20.0 average) for the No. 4 seed and a first-round bye, but is also not likely to drop far enough to fall to the No. 9 seed that would send it on the road for the first round.

If the current seedings hold, PCA would host Christian Collegiate Academy — a team it beat 46-30 last Friday — next week in the first round.

Tallulah Academy, meanwhile, is currently the No. 10 seed and appears likely to stay there regardless of what it does against Porter’s Chapel. The Trojans would travel to play the No. 7 seed in the first round, which Marvell Academy and North Sunflower Academy are currently tied for.

Jake Lange hurt his ankle in the first half, which forced head coach Will Hall to turn to Tee Webb and running back Chandler Pittman to finish the game.

Webb and Pittman became the fouth and fifth quarterbacks to throw a pass for Southern Miss this season, along with Lange, Trey Lowe and Ty Keyes. Another QB, Jack Walker, was injured in preseason training camp.

Pittman played quarterback at Magee High School and led them to a 12-0 record and the MHSAA Class 3A championship in 2020. He mostly ran the ball from the Wildcat formation against UAB, but did complete his only pass for a 9-yard gain.

“It’s a process that we’re going through. Unfortunately, we’re battling through injuries at the quarterback position. Like I told Coach Hall, I’m ready to step up if I’m needed to,” Pittman said. “You go through bumps and bruises but as an offense, we’re still on the same page together. There are some things that we definitely need to clean up. The injury situation just kind of has the quarterbacks bouncing around.”

A big part of the reason for USM’s quarterback injury bug has been an inability to protect them. Southern Miss has allowed 31 sacks in seven games, which ranks 129th out of 130 FBS teams. UAB had three sacks.

Hall said after the game that Lange could have returned if needed. With the Golden Eagles trailing 31-0 at halftime, however, he opted to keep him on the bench instead of risking further injury. Southern Miss has an open date this week.

In three games, Lange has completed 46 of 78 passes for 561 yards, with three touchdowns and four interceptions.

“He could have played in the second half. We just felt like with the way the game was going and the game being out of hand that we’d give some guys a shot to try to keep him healthy for the rest of the year,” Hall said.

3
Alabama’s defense has always been a hallmark under head coach Nick Saban. So has its ability to score points on that side of the ball.

Jordan Battle returned an interception 40 yards for a touchdown in the first quarter of the Crimson Tide’s 49-9 win over Mississippi State on Saturday. It was the team’s fifth non-offensive touchdown this season and the 85th in Saban’s 14 1/2 seasons as head coach.

Alabama has 12 takeaways this season, but Battle’s interception was its first on defense. The other four non-offensive touchdowns came via two blocked punts and a pair of kickoff returns.

Mississippi State, meanwhile, has not scored a touchdown of any kind against Alabama in 11 quarters, and only has one in the last four meetings. MSU’s points Saturday came from three field goals by Brandon Ruiz.

The last time the Bulldogs reached the end zone against Alabama was on a 1-yard touchdown run by Kylin Hill midway through the first quarter of their 2019 game.

Mississippi State’s last win against Alabama was in 2007. Since then, it has only scored in double figures against the Tide three times and has a total of 11 touchdowns.

4
The Dallas Cowboys defeated the New England Patriots 35-29 in overtime on Sunday, and made some NFL history along the way.

Dak Prescott threw a 1-yard touchdown pass to CeeDee Lamb in the third quarter that was the 2,500th touchdown in franchise history. That’s the most by any team in the NFL since 1960, when the Cowboys entered the league.

The Green Bay Packers, one of the NFL’s original franchises, have the most touchdowns in league history with 3,518.

Prescott also achieved an individual milestone. The former Mississippi State star was 36-of-51 passing for 445 yards, marking the ninth time in his six-year career he has thrown for more than 400 yards. All of the other quarterbacks in Cowboys history reached that mark nine times combined.

Tony Romo had five 400-yard games, Don Meredith had two, and Troy Aikman and current offensive coordinator Kellen Moore had one each.