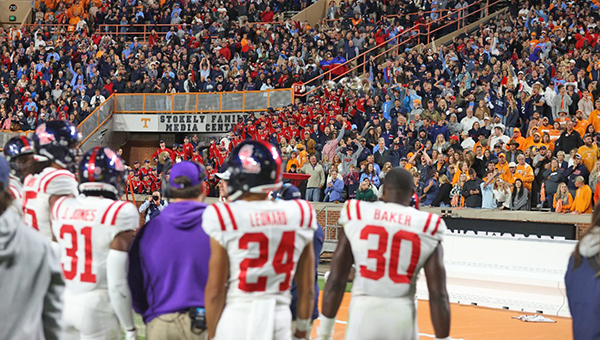 Ole Miss players look toward the crowd in the final minute of Saturdays' game against Tennessee. Fans pelted the field with trash and debris after a controversial call went against the Vols, causing a 20-minute delay in the action. (Joshua McCoy/Ole Miss Athletics)

The Southeastern Conference came down hard on the University of Tennessee on Monday, two days after its fans pelted the field with trash in the final minute of its football game against Ole Miss.

The SEC fined Tennessee $250,000 and ordered the university to conduct an investigation to identify those who threw the debris onto the field. Individuals identified will be prohibited from attending Tennessee athletic events for the remainder of the 2021-22 academic and athletic year.

Tennessee’s fine will be deducted from its share of conference revenue.

“The disruption of Saturday night’s game is unacceptable and cannot be repeated on any SEC campus,” SEC Commissioner Greg Sankey said in a statement. “Today’s actions are consistent with the oversight assigned by the membership to the SEC office, including the financial penalty and review of alcohol availability. We will use this opportunity to re-emphasize to each SEC member the importance of providing a safe environment even with the intensity of competition that occurs every week.”

The university also must submit a plan to the conference to enact policies intended to prevent similar incidents before the next football home game Nov. 13 against Georgia.

Tennessee plays its next two games on the road, this Saturday at Alabama and next week at Kentucky.

In a statement outlining the penalties, the SEC said it was not suspending alcohol sales at Neyland Stadium but could do so if other requirements are not met.

Tennessee athletic director Danny White said in a statement that he talked with Sankey repeatedly about what happened in the game. White again called the stoppage “unacceptable” and said some of what the SEC ordered already is happening, including the review of video to identify fans who disrupted the game.

“The conduct of a small percentage of fans has led to unfortunate consequences on multiple fronts,” White said. “While I don’t believe that conduct is representative of the Tennessee fanbase as a whole, I understand this imperative action by the league. Safety is paramount.”

With 54 seconds left in Saturday’s 31-26 loss to Ole Miss, Tennessee was stopped just short of a first down on a fourth-and-24 play. A replay review confirmed the spot of the ball, and fans began throwing bottles, cans and other debris onto the field.

Ole Miss head coach Lane Kiffin was nearly hit with a golf ball, and on his way out to the tunnel after the game made a one-handed catch of a water bottle thrown in his direction. Other items thrown onto the field included a mustard bottle, pizza boxes, beer cans and hot dogs.

Play eventually resumed after a 20-minute delay and Ole Miss survived a last-ditch drive by the Vols to win.

“I still have my souvenir golf ball,” Kiffin said after the game. “I also got hit with bottles with some brown stuff in them. I don’t think those fans would waste moonshine. You’ve got one of the most passionate fan bases in America. A call didn’t go their way.”

At his weekly press conference on Monday, Tennessee coach Josh Heupel said it was “a very small number” of fans that caused the disturbance.

“I know for some people the story is about what happened, but our administration has obviously made it clear that that’s not the stance in what we want from the Volunteer spirit. You know that I feel the same way. That’s a very small number,” Heupel said. “The passion and energy from our fanbase … I’ve been in a lot of competitive arenas as a player and as a coach. There was nothing better that I’ve ever been in than what happened on Saturday night.”