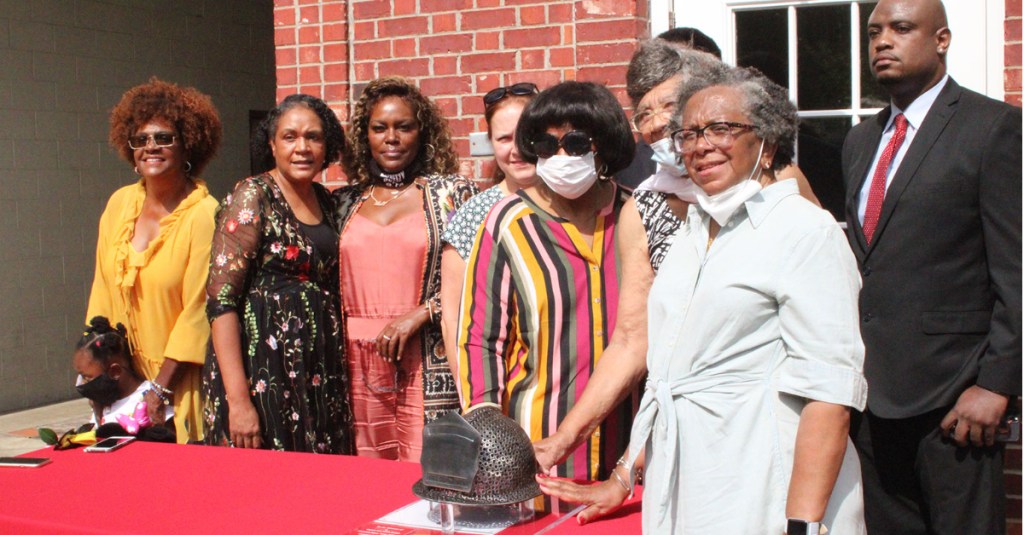 The families of Capt. John Krueger, Lt. David Lewis, Lt. Johnny McBroom and firefighter Jimmy Gibbs gather behind a steel helmet that is a memorial to the men. Krueger, Lewis and McBroom were killed in the July 3, 1974, Paul Pride Butane Co. fire. Gibbs was severely injured. (Photo by John Surratt)

Families, firefighters and officials gathered at the Vicksburg Fire Department’s Memorial Fire Station on Indiana Avenue to honor the memory of six fallen firefighters on Friday.

“In 1837, the Vicksburg Fire Department was established (and) for the past 14 years, the Vicksburg Fire Department has served the community; there have been many alarms, celebrations and even tragedies,” Fire Chief Craig Danczyk said. “As firefighters, we do not know when the next alarm will come but rest assured we will answer the call when it comes.”

Danczyk recalled the serious alarms firefighters have answered over the years including the July 3, 1974, Paul Pride Butane Co. fire that claimed the lives of firefighters Capt. John Krueger, Lt. David Lewis and Lt. Johnny McBroom. Firefighter Jimmy Gibbs, the sole survivor of that fire and who was injured in it, died in May 2012.

The day of the fire was called the deadliest day in the fire department’s history.

The men, Danczyk, said, responded to an emergency at Pride Butane near the intersection of what is now Culkin and Jackson roads.

“Upon arrival, ignition occurred and the three (Krueger, Lewis and McBroom) would make their final alarm at the Vicksburg Fire Department,” he said, adding the lives of the families of the four men “changed forever.” Gibbs’ injuries forced him to take medical retirement from the department.

On July 3, 1974, he said, “The heroes on Engine 1 answered the call. Memorial Fire Station No. 2 was built to better serve our community and to honor these men.”

Besides Krueger, Lewis, McBroom and Gibbs, the fire department honored retired Battalion Chief Darrell Flaggs, who died of cancer in 2020.

“I’ve lost a brother in the fight against cancer,” Rivers said. “In thinking, you use your mind to come up with what would really depict what people go through in that struggle. Steel came to mind.”

Rivers also presented a steel helmet made of individual steel nuts welded together to the fire department as a memorial to Krueger, Lewis, McBroom and Gibbs. The helmet, he said, is the third to be presented. The first went to the El Paso Fire Department in memory of a firefighter; the second to the New York Fire Department for 9/11.

Firefighters, he said, do not have a “job.”

“This is a lifestyle,” he said. “A job, you have the opportunity to say I don’t want to do this anymore and you can move on to the next one.”

“I’m sure Darrell would be pleased,” Flaggs’ wife Jennette said. “He dedicated his life to the fire department; he took his job very seriously.”

After the ceremony, Danczyk said Flaggs, who retired after 33 years with the fire department “had a pride of ownership in the department and a commitment to do better at every level.”

“When he was a lieutenant on the truck, his truck was always in good shape,” Danczyk said. “When he was a captain he kept the station at a high level.”

As an assistant chief, Danczyk said, Flaggs instilled pride of ownership in the men under him.

After his retirement, Flaggs, Danczyk said, remained in contact with him.

In closing remarks, Flaggs’ brother, Mayor George Flaggs Jr., said when firemen leave home for work, “The last thing on their mind is a legacy but today, the city of Vicksburg, Chief Danczyk, Chief (Derrick) Stamps and Mr. Rivers, we say thank you, because what you’re doing today is not letting us forget these families because it was these families that stood back to make a sacrifice.”

Flaggs said firefighters and police officers are unique in the way they serve because when they leave home they don’t know if they’re going to return. He said the families of first responders should be thanked for the sacrifices they make and “for sharing your loved ones with us.”