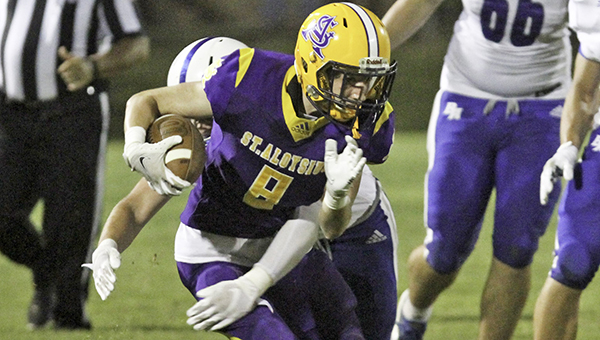 St. Aloysius receiver Carter Magee (8) tries to break a tackle earlier this season. St. Al can clinch a berth in the MAIS Class 4A playoffs by beating Tri-County in its regular season finale on Friday. (Paul Ingram/For The Vicksburg Post)

The situation for St. Aloysius is simple. Beat Tri-County and they’re in the playoffs.

Actually doing it is not so simple.

Tri-County (8-1, 2-1 District 3-4A) is one of the best teams in MAIS Class 4A, a bonafide championship contender, and St. Al is heading toward the finish line with a depleted roster and a two-game losing streak.

It’s a David vs. Goliath scenario, and it’s not hard to see which team is playing which role when they match up Friday night at Balzli Field.

“It’s the toughest one all year. They are an excellent football team from top to bottom. Tri-County is as good as advertised and they’re probably going to meet up with ACCS in the state championship game or deep in the playoffs,” St. Al coach Bubba Nettles said. “So it is a tough task. They’re excellently coached and have athletes everywhere. They are an established program. They are what we aspire to become.”

St. Al’s simplest path to the playoffs is an upset victory against an opponent that has scored at least 40 points in eight of its nine games and posted four shutouts. It’s not the only route, though.

The Flashes (2-7, 1-2) are one of five teams vying for the last two spots in the Class 4A bracket, along with Columbia Academy, North Delta, Oak Hill Academy and Wayne Academy.

St. Al is currently No. 14 in the Class 4A power point rankings that determine playoff selections and seeding — four district champions and eight wild cards make up the 12-team bracket — but could move as high as No. 11 with a win Friday, regardless of other results. There are also scenarios where it can get into the playoffs with a loss, but they require other teams to lose as well.

If St. Al gets in as the No. 12 seed, it would most likely turn around and play at Tri-County next week in the first round. Tri-County appears locked in as the No. 5 seed and has little to gain or lose on Friday.

“It’s wild,” Nettles said of the various scenarios. “Coaching all those years in the public schools, it’s ‘We’ve got to finish at least fourth and we’re in.’ What I like here is, it rewards your victories regardless of whether it is or is not district play, and it rewards your strength of schedule. Right now we are being rewarded through who we ave played moreso than who we have beaten.”

St. Al has only won twice this season, but its playoff hopes have been buoyed by the strength of schedule component of the MAIS power points formula. Teams earn points for each of their opponents’ victories as well as their own, and St. Al’s opponents have a combined 57-33 record.

Nettles said playing such a tough schedule hasn’t been a lot of fun, but was grateful that it might pay off on some level in the long run.

“It’s validation. We went through, in terms of private school football in 4A, the SEC West. It’s tough,” Nettles said. “The crazy thing about it is, if we manage to slip in at 12 we’ll just ride over to Flora to play (Tri-County) again. Hopefully they’ll be looking for revenge in two weeks instead of just another step in their path to the state title.”

To do that, the Flashes will need to play one of their best games of the season.

Tri-County’s only loss came two weeks ago against Adams County Christian, a 19-18 setback that gave the District 3-4A title to ACCS. Tri-County is led by the 1-2 punch of running backs Trace Dearman and Zac Clark, who have combined for 2,270 rushing yards and 37 touchdowns. Both have surpassed the 1,000-yard mark, and they’re averaging 11.4 yards per carry.

Nettles said stopping the Rebels’ running game was crucial to the Flashes’ chances, but it’s not all they’re about.

“Stop the run. If we can shut down Dearman, I think that will put us in position to be competitive,” Nettles said. “But they have weapons all over the field. You take away one and they’re going to try to beat you with the others. They’re not going to go into panic mode if we’re able to shut down the run. They’ll adjust and attack us from another angle.”

Nettles added that he was looking for the Flashes to finish a difficult season on a positive note. That doesn’t necessarily mean a win, but simply a solid effort against yet another quality opponent.

“The spotlight is huge this week. Win or lose, it’s all about how we compete the entire ballgame to finish the season, if it is our last game,” Nettles said. “That’s one of our big things. It doesn’t matter what’s going on in our lives or out here, if you play St. Aloysius football and strap that helmet on you better expect to have to play four quarters. Other than winning the football game, our main goal is to show the world we can compete.”