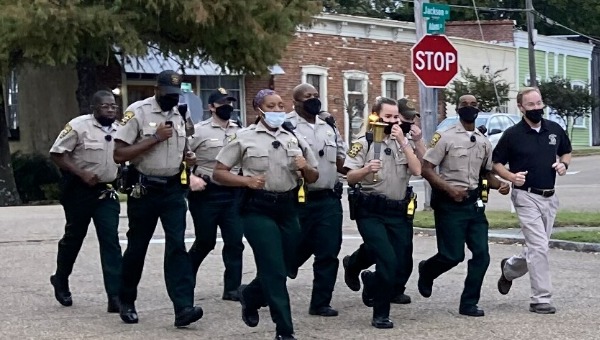 Warren County Sheriff's Deputy Rita Freeman, center, holds the Special Olympics torch as she, Sheriff Martin Pace and other deputies move along Cherry Street as they run their leg of the torch run. Submitted

Deputies with the Warren County Sheriff’s Office took time Wednesday to carry the torch for others.

“Law enforcement partners with the Special Olympics and every year,” Pace said. “The torch run is an event that leads up to the statewide Special Olympics that are held each year at Keesler Air Force Base in Biloxi. The Olympic torch is run from North Mississippi at the Tennessee line all the way to the Mississippi Gulf Coast with various law enforcement agencies along the way running a leg of the run.”

Pace said the Warren County Sheriff’s Office has partnered with the Special Olympics for many years, adding Biloxi police officer Aaron Smith with the Biloxi Police Department, the escort of the torch from the Tennessee State Line to Biloxi, passed through Vicksburg Wednesday morning, allowing Pace and the deputies to carry the torch.

“We were honored to run a leg of its journey,” Pace said. “We were escorted by the Vicksburg Police Department and the Biloxi Police Department assisted. This very torch will be used to light the cauldron at the Special Olympics in Biloxi.”

The 2022 state Special Olympics will be in June.