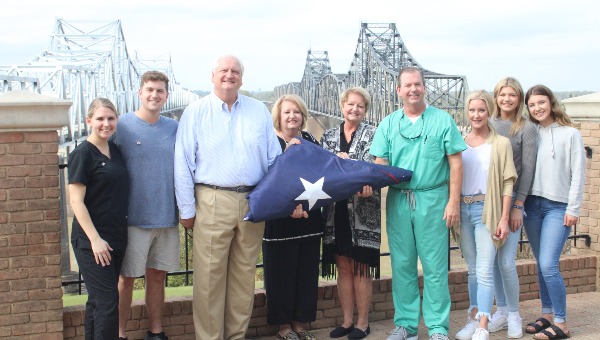 The family of Dr. Chester Warren Masterson Sr. and Martha Anne Gordon Masterson display a flag that will be flown over the Old Highway 80 bridge in the couple’s honor.

Chester Masterson was a medic in the U.S. Army during the Korean War and served two years in Japan. A graduate of Crowder High School, Northwest Mississippi Junior College and the University of Mississippi, he received his medical degree from the University of Tennessee in Memphis and did his internship at Baptist Memorial Hospital in Memphis.

He completed his general surgery residency at Kennedy Veterans Hospital in Memphis and ENT-EENT residency at Tulane University Medical Center. He was an otolaryngologist in Vicksburg from 1964 to 2000 and served in the Mississippi House of Representatives from 2000 to 2008.

Martha Masterson was a homemaker and coached girls in softball and basketball for many years. She was a co-organizer of the Vicksburg Girls Softball League. She was a golfer and one of the first members of the Clear Creek Ladies Golf Association.