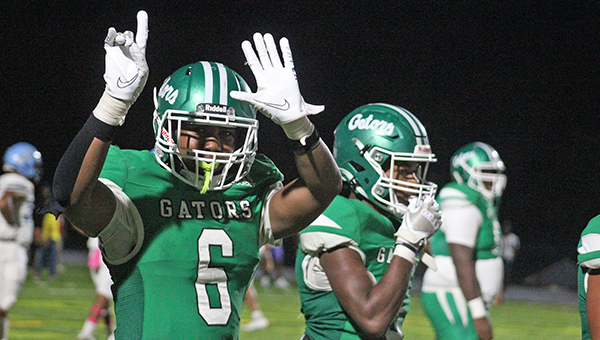 Vicksburg running back Malik Montgomery (6) celebrates after the Gators scored a touchdown last week against Ridgeland. Vicksburg quarterback Ronnie Alexander (1) throws a pass against Ridgeland. The Gators will go on the road Friday to play Neshoba Central, with a chance to clinch their first region championship in 31 years. (Ernest Bowker/The Vicksburg Post)

Vicksburg High hasn’t quite put up video game numbers, but its season has certainly had the flow of one.

The Gators honed their skills against some lower-tier minions. They proved themselves against a slightly more formidable foe. And now it’s time for the boss battle.

Vicksburg has a chance to win its first region title since 1990, while Neshoba Central is going for its third in a row. More importantly, VHS coach Todd McDaniel said, it’s a chance to show the rest of the state that his team is a true force to be reckoned with.

“It would mean a lot. It would mean we’re definitely turning the corner,” McDaniel said. “We’re trying to be one of the best 5A programs in the state of Mississippi. It’s coming to fruition now. All of the hard work, all the dedication, and we can see the gains from it. I wholeheartedly believe that right here in Vicksburg, Mississippi, we can be the best 5A football program in the state.”

Since losing their first two games, the Gators have been on a serious roll. They started the Region 2-5A schedule with four consecutive shutouts, and their six league victories have been by an average of 37 points each.

The surge was emphatically capped by a dominant 36-14 rout of Ridgeland last week. Vicksburg ran for 261 yards, led 22-0 at halftime, and the margin was never less than two scores after the midway point of the second quarter.

“It was a different level of focus. They understood what it was going to take to win this football game. And now, going to another level this week, they understand what it’s going to take to go up here and win this week,” McDaniel said. “We’ve got to not beat ourselves, play as a team, play as a family, and regardless of what type of adversity we bump into just keep fighting and go on to the next play.”

McDaniel said Neshoba Central won’t do anything Vicksburg hasn’t seen so far, but it will do it a lot better than most of its other opponents.

Neshoba quarterback Eli Anderson has thrown for 2,158 yards and 31 touchdowns, with only six interceptions in 183 pass attempts. Four receivers have at least 390 yards and four touchdowns, led by Ja’Naylon Dupree (40 receptions, 720 yards, 11 touchdowns).

The Rockets are ranked No. 3 in the Mississippi Associated Press Class 5A poll, and have won 22 of their last 23 games against Region 2-5A opponents. Two of those wins came against Vicksburg.

McDaniel said it’ll take not only his secondary playing well to slow down the Rockets, but the front four as well. Vicksburg had three sacks last week and knocked Ridgeland’s starting quarterback Thomas Dyess out of the game on the opening series.

“They throw the ball really well. I think it’s going to be a great matchup, because our secondary is extremely good. They have two or three good receivers that can get down the field and stretch it, and a quarterback that can really throw it,” McDaniel said. “I know our secondary can cover them, but we want to make sure our defensive line gets pressure on their quarterback and makes him move off his spot and not let him sit back there and play seven-on-seven. We want to be able to put him on his back.”

No matter what happens Friday, the Gators have set themselves up well for the postseason. The winner of Friday’s game claims the region championship and a No. 1 seed, but the loser still gets the No. 2 seed and a home game in the first round of the Class 5A playoffs.

It’s the first time Vicksburg has achieved that feat since 2008. McDaniel, however, doesn’t want to let an even bigger prize slip away.

“You talk to the kids all year about three seasons, and come to find out it’s four seasons. It’s two seasons within the district. We’re fighting for seeding, we’re fighting for the No. 1 and No. 2 seeds which means a lot, so hopefully we can go up here to Neshoba and it’s a tall task but I think we’re built for it,” McDaniel said. “I love the movie ‘Seabiscuit.’ Once that horse looks into the other horse’s eyes and we get a little faster. We understand the stakes.”