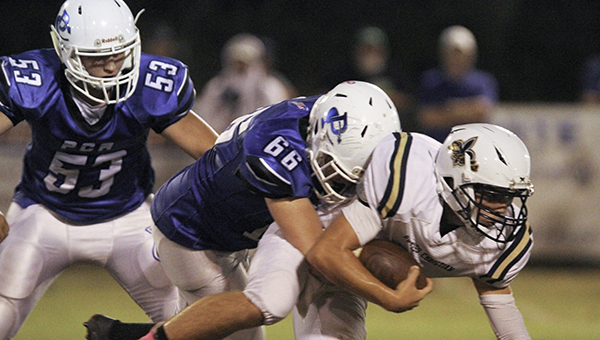 Porter's Chapel Academy's Alex Davis (66) makes a tackle earlier this season. PCA will host Tallulah Academy in its regular-season finale on Friday. Both teams have clinched berths in the MAIS Class 2A playoffs. (Paul Ingram/For The Vicksburg Post)

Going into the final night of the regular season, the MAIS Class 2A playoff picture is like a dangerous batch of volatile chemicals. Leave it alone, and it’s fairly ordinary. But shake it up a bit, and things get really interesting really fast.

The Class 2A playoff field is largely set, but where everyone will end up in the bracket is very much up for grabs. Two teams in the middle of it, Porter’s Chapel Academy (6-3, 0-2 District 3-2A) and Tallulah Academy (5-4, 0-2) face each other Friday in Vicksburg with the potential to change their postseason path.

“There’s still quite a bit that could happen,” PCA coach Blake Purvis said. “A win puts you playing the fourth seed in the second round instead of the two or the three. By seeding purposes, a win still puts you playing the lowest seed in the second round. We’re approaching it as we need to win, and however the rest of it works out is how it works out.”

Purvis’ Eagles won their last two games to clinch their first playoff berth since 2014 and first winning season since 2008. They are currently the No. 6 seed in the 12-team Class 2A bracket, but could wind up anywhere from fifth to 10th depending on Friday’s results.

Purvis said he likes where the Eagles are right now. If things hold as they are, PCA would host the No. 11 seed — currently Christian Collegiate Academy, which it beat last week — in the first round, and be on the opposite side of the bracket from district rivals Prairie View and Claiborne.

PCA could, however, move up to No. 5 if Calhoun Academy (6-2) beats Manchester Academy (8-1) on Friday. That could place it on the same side as Prairie View and Claiborne, unless either of them moves up or down.
A loss would drop PCA as low as the ninth or 10th seed and might even force it to go on the road next week.

“Probably the best case scenario for us is a win and then a Manchester loss,” Purvis said. “That would put Prairie View and Claiborne on the same side of the bracket, and then we would be on the side with Manchester. Six is where we would like to be.”

Whether they wind up at No. 5 or No. 6, Purvis said he wants to beat Tallulah just to avoid heading into the playoffs on a bad note.

“We want to keep the momentum going. This would be win No. 3 in a row. So keeping that momentum going, and then the confidence that comes with beating a really good football team,” Purvis said. “Historically, Tallulah has been phenomenal and they’re no different this year. The momentum that comes with beating one of these upper echelon teams, there’s a lot to play for and to work toward this week.”

While PCA’s position is a bit unstable, Tallulah’s seems more set. It could move up as high as No. 8 with a win, but is more likely locked into the No. 10 seed. No matter the outcome Friday, it has clinched a playoff berth.
That knowledge has Trojans coach Bart Wood in a different mindset than his counterpart.

Although they’ll likely be a double-digit seed, there might not be a more dangerous team in Class 2A than Tallulah. The Trojans have been ravaged by injuries this season, had to forfeit a game two weeks ago because of a COVID-19 outbreak, and still have a winning record. When they were at full strength earlier in the season, they handed potential No. 1 seed Manchester its only loss.

“I’m proud of the boys. Some have played positions they’ve never played before. It’s been nerve-wracking for us (coaches) to figure out who to put where. It’s had its positives, but it’s not been a relaxing season,” Wood said. “It’s a character-builder. I’m very, very proud of them. We’ve got a good enough chance to go a long way in the playoffs. We’ve got all the pieces. We just need them all out there together.”

Since moving to the MAIS’ 8-man division in 2013, Tallulah has been one of its best programs. The Trojans have won three state championships and played for two others.

Purvis said he expects that team to show up Friday, and not the one that patched itself together all season long.

“Obviously they’ve been decimated with the injury bug. They’ve had a COVID forfeit. They’re going to be as healthy as they’ve been since Week 1, so they’re as dangerous as Tallulah has ever been,” Purvis said. “Speaking with other coaches around the state, there’s a lot of coaches that believe Tallulah when healthy is one of the top two teams in our classification. That’s what we’re facing Friday. We’re facing the tradition and the excellence of Tallulah. We’re not facing an injury-decimated team like they have been through much of the year.”