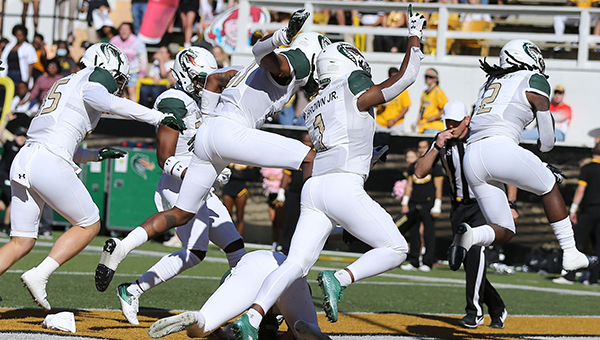 DALLAS (AP) — The American Athletic Conference is adding UAB, Texas-San Antonio, Rice, North Texas, Charlotte and Florida Atlantic to the league, replacing three schools that are leaving for the Big 12 Conference and growing to 14 teams.

The AAC announced the additions Thursday, a move that it hopes will stabilize the conference in the short term and allow it to withstand future poaching of its members by wealthier leagues.

The conference said when exactly the new members join is still to be determined. All six schools are currently members of Conference USA.

“This is a strategic expansion that accomplishes a number of goals as we take the conference into its second decade. We are adding excellent institutions that are established in major cities and have invested in competing at the highest level,” AAC Commissioner Mike Aresco said.

Pinning down an ETA for the AAC’s new additions is complicated because the conference doesn’t realistically have room for the newcomers until a number of outgoing schools have left. Those within the AAC believe 2023 is a realistic target for the transition.

The AAC’s move strips Conference USA of nearly half its membership, leaving that league both searching for new members and trying to fend off other poachers. A request for comment from Conference USA Commissioner Judy MacLeod was not immediately returned.

The Sun Belt has said it is interested in expanding beyond its current 10 football members and some of C-USA’s remaining eight schools — including Southern Miss — would be geographic fits.

Conference USA has struggled in recent seasons in comparison to other leagues, with TV deals that have generated well under $1 million per year per school and made the league’s games tricky for its fans to find.

The AAC is at the front end of a 10-year deal with ESPN that will pay the conference’s schools between $7 million and $8 million per year over the length of the contract.

The Sun Belt continues to publicly say it will explore its options, but Commissioner Keith Gill told AP the conference is feeling no pressure to act now that the American has made its move.

Gill declined to comment on reports the 10-football member Sun Belt is eyeing some of C-USA’s remaining schools such as Southern Miss, Marshall and Old Dominion along with FCS powerhouse James Madison.

“There is no timetable,” Gill said.

The additions will give the American four members in Texas. The league office recently relocated to the Dallas area after being headquartered in Providence, Rhode Island.

The American, formerly the Big East, has been a feeder conference from Power Five leagues for nearly two decades. Most recently, the Big 12 announced the additions of AAC powers Cincinnati, Houston and Central Florida to replace Southeastern Conference-bound Oklahoma and Texas.

“We have enhanced geographical concentration, which will especially help the conference’s men’s and women’s basketball and Olympic sports teams,” Aresco said. “And we will continue to provide valuable inventory to our major media rights partner, ESPN, which will feature our members on the most prominent platforms in sports media.”

With the new additions, 12 of the AAC’s 15 schools will be former members of Conference USA. Only Navy, Wichita State and Temple were not. With UAB’s departure, Southern Miss is the only school that has been in Conference USA since its inception in 1995.

UAB president Ray L. Watts says leaving Conference USA — where UAB has been a charter member since 1995 — is somewhat bittersweet.

“We are grateful for more than 25 years with Conference USA and thank conference officials and member institutions for the great memories,” Watts said. “Now we look forward to forging new memories with perennial basketball power Wichita State, former UAB rivals Memphis and Tulane, tradition-rich service academy Navy, and the many other well-known and respected institutions of the AAC.