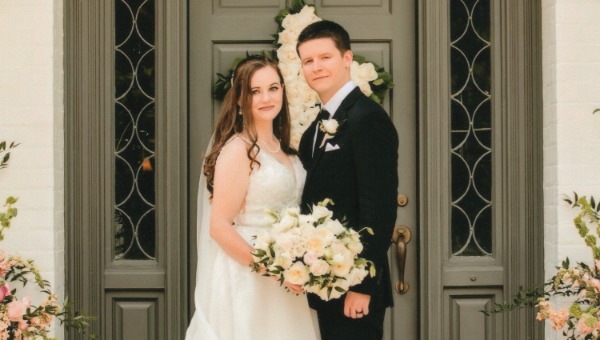 The marriage of Eleana Michele Davis and Andrew Thomas Reel was celebrated on Saturday, the twenty-second of May, two thousand twenty-one, at six o’clock in the evening at The River House in Vicksburg, Miss., over-looking the Mississippi River. Because of restrictions related to COVID-19, the wedding and reception were held outside. Regrettably, seating was limited due to social distancing.

The adult and children female attendants wore pearl jewelry which was a gift from the bride. June Imogen Davis served as the Beloved Canine Attendant.

The Best Man was Mr. Ethan Keith Reel, brother of the groom. Groomsmen were Mr. Charles Otto Bock, brother-in-law of bride, and Mr. Dominique Bell. The Ring Bearer was Master Baxter Lee Sellers, cousin of the groom. Ushers were Mr.
Jonathan Sellers and Mr. J.J. Lundy, cousins-in-law of the groom.

Reverend Mitch Cochran officiated the ceremony. Music was beautifully performed by keyboardist, Mrs. Denise Ragsdale, and singers Dr. Paul Ballard, Mrs. Anne Gent, and Mr. Steven Lloyd. Musical selections included traditional
wedding music by Bach and Mouret. Contemporary pieces were “So Will I” and “Can You Feel the Love Tonight.” The bride entered to “God Blessed the Broken Road.”

Eleana and Andrew’s first dance was lovingly performed to “I’ve Had the Time of My Life.” The father-of-the-bride, Dr. Michael Davis, dressed as Toy Story’s Cowboy Sheriff Woody for reveling with Eleana to “You’ve Got a Friend in Me.”
The groom and his mother, Stacie, celebrated the happy event by dancing to “My Wish.”

The Master of Ceremonies for the reception was Mr. Noel Tello.

On the eve of the wedding, the groom’s parents hosted a festive rehearsal dinner at Anchuca. Guests were entertained by a slide presentation of the bride and groom from infancy to the present.

The couple honeymooned at Walt Disney World Resort in Orlando, Fla. They are making their home in Vicksburg where the bride teaches music at Bovina Elementary School and is a free-lance soprano. The groom is a radiology technologist and sonographer at Merit Health River Region Medical Center.