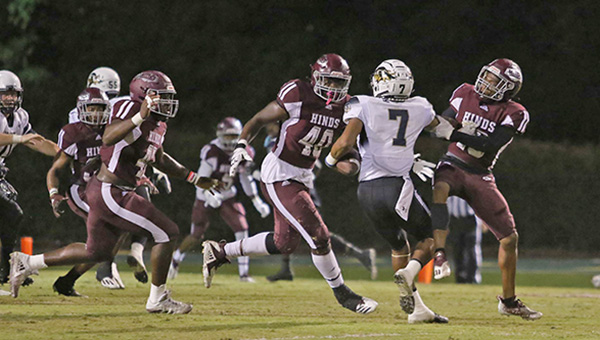 Jeffrey Pittman rushed for 142 yards and three touchdowns, Hinds’ defense forced four turnovers, and the Eagles crushed East Central 52-14. Hinds finished with 417 rushing yards as a team and topped the 50-point mark for the second game in a row.

“We came out with a mindset to run the ball,” Hinds offensive coordinator Kelly Murphy said. “Our offensive line stepped up big this evening. It’s always good to have a game where we impose our will up front.”

Phillips finished with 69 yards on 10 carries and McCray had 79 yards on seven carries. Jamarian Samuels added 62 yards and a touchdown. Former Vicksburg High star Tyrese Wolfe had a fumble recovery.

Gabriel Larry was 11-of-19 passing for East Central (2-5, 2-3), for 222 yards and two touchdowns. Corey Goldwire caught three passes for 127 yards, including a 77-yard touchdown in the first quarter.

Austin Davidson threw three touchdown passes for Gulf Coast (6-2, 4-1 MACCC South), including two to Jalen Bracey that covered 64 and 51 yards. The latter gave the Bulldogs a 27-23 lead with 11:51 left in the game.

Midway through the fourth quarter, Jones drove from its own 20 to the Bulldog 34, but Quaterius Hawkins was sacked by Ishmael Naylor to end the threat.

Jones had one final opportunity, moving to the Bulldog 49, but a Hawkins pass to the end zone fell incomplete on the game’s final play.

Jones was 9 of 15 passing, for 176 yards. he threw a 51-yard TD to Christopher Martin on the game’s opening drive, and a 67-yard TD to Lorenzo Perez later in the first quarter. Thompson’s 1-yard TD run put Mississippi Delta ahead 21-9 with 56 seconds left in the third quarter.

Kerrick Ross rushed for 47 yards and a TD for Holmes, and also caught a 50-yard touchdown pass.

Williams’ 11-yard touchdown with 3:54 left in the game gave Northwest a 41-13 lead, and set the program’s career record for rushing touchdowns. It was the 31st of Williams’ career.

Michael Hiers threw two touchdown passes in the first half as Northwest raced out to a 21-0 lead midway through the second quarter. Williams’ 45-yard TD run with 12:48 left in the third made it 28-0.

Hiers completed 17 of 21 passes for 209 yards, with two touchdowns and no interceptions.

East Mississippi only led 14-0 at halftime after Jones and Miller hooked up for touchdown passes of 6 and 29 yards. Peyton Rodgers kicked a 23-yard field goal early in the third quarter, and then Ethan Conner and Montae Spivey scored rushing touchdowns in the fourth to put it on ice for the Lions.

Co-Lin had 8 rushing yards as a team, although quarterback Paul Hargrave was 21-of-37 passing for 246 yards and one touchdown. Tyquan Henderson caught five passes for 95 yards, including a 47-yard touchdown early in the third quarter.

One of Moore’s touchdowns was a 48-yarder to Caleb Anderson. Anderson caught the pass at the 35-yard line and dragged a defender the rest of the way to the end zone.

Kennique Bonner-Steward’s 15-yard TD pass to Trayvon Moore with 8:05 left pulled Coahoma within a point, but the PAT was blocked. Bonner-Steward was then intercepted by Steven Edwards in the end zone with less than a minute to go to seal it.