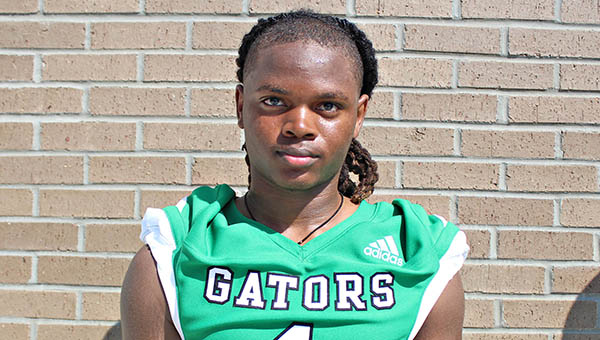 Vicksburg High quarterback Ronnie Alexander threw a 3-yard touchdown pass to Tyler Henderson for his team's only score in a 10-6 loss to Neshoba Central on Friday.

The Vicksburg Gators played hard. They fought hard. But, in the end, they also fell hard.

Neshoba Central came up with a defensive stop in the final two minutes and made a couple of early scores stand up to beat Vicksburg 10-6 on Friday.

No. 3 Neshoba Central (9-0, 7-0 MHSAA Region 2-5A) clinched its third consecutive Region 2-5A championship, while Vicksburg (6-3, 6-1) missed its opportunity to win one for the first time since 1990. The Gators still have clinched the No. 2 seed from the region and will host a first-round game when the Class 5A playoffs begin Nov. 12.

“It was just a knockdown, drag out, slugfest type game. They came out on top tonight, and hopefully if we keep playing we’ll see them again,” Vicksburg coach Todd McDaniel said.

The slugfest between the Gators and Rockets was a championship game, and worthy of the name. Neshoba Central scored on a 5-yard touchdown pass from Eli Anderson to Ja’Naylon Dupree and a field goal by Hunter Bavetta to take a 10-0 lead at halftime, but did not score in the second half.

Vicksburg broke through with a 3-yard touchdown pass from Ronnie Alexander to Tyler Henderson in the third quarter to cut it to 10-6, and had the ball with a chance to win late in the fourth quarter. The Gators got the ball on a fumble inside the 20-yard line in the final two minutes, but turned it over on downs.

Vicksburg will have an open date next week to regroup before finishing the regular season Nov. 4 on the road at Holmes County Central. The Gators, who only won two games in 2020, have assured themselves of a home playoff game for the first time since 2008 and showed Friday they can hang with the best Class 5A has to offer.

“Our kids played extremely well the entire night. The fact is they got a ball on us and were able to get in the end zone,” McDaniel said. “It’s a championship football game. Both teams are not going to score 40 points unless somebody else doesn’t deserve to be there. It ended up 10-6. We’ll go back to the drawing board and we’ll get back at it.”