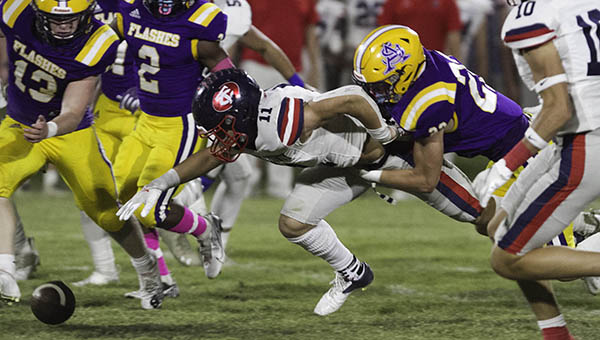 St. Aloysius needed a win and a lot of help Friday night to sneak into the MAIS Class 5A playoffs.
It got neither.

Trace Dearman scored four rushing touchdowns, and Tri-County Academy scored three times in the last 4 1/2 minutes of the first half to blow the game open as it rolled to a 48-0 victory over St. Al in the regular-season finale for both teams.

St. Al (2-8, 1-3 MAIS District 3-4A) was one of five teams vying for the last two spots in the MAIS Class 4A bracket, but needed an upset of Tri-County (9-1, 3-1) and some other teams ahead of them to lose. It finished 14th in the MAIS Class 4A power point rankings, and the top 12 qualify for the postseason. This is the first time St. Al has missed the playoffs since 2017.

“I’m just excited the way everything finished. I know getting your brains beat in is not a wonderful thing, but the kids competed hard,” St. Al coach Bubba Nettles said. “This senior class has helped me set the foundation for this program to continue building it. They stuck by it and fought their butts off to show the underclassmen how it’s supposed to be done. We’re getting ready to start our offseason program and I’m pretty good at that.”

Tri-County is a championship favorite in Class 4A, and showed why on Friday night.

Dearman scored on a pair of 3-yard runs in the first quarter to stake the Rebels to a 14-0 lead, but Nettles said he felt the Flashes kept them in check — until Tri-County took to the air late in the second quarter.

Ty Milner threw a touchdown to Kamp Shepherd on a reverse pass with 4:14 to go, and Shepherd caught another TD pass from quarterback Rouse Boyce with 10 seconds left. In between, Dearman scored on another 3-yard run. The 21-point burst took it from a respectable two-score margin to a 34-0 blowout at halftime.

Tri-County added two more touchdowns in the second half, on a 4-yard run by Dearman and a run by Thomas Murphy.

“We were shutting the run game down and they went to the pass, and just like it’s been all year we struggled defending the pass. That’s how they beat us,” Nettles said.