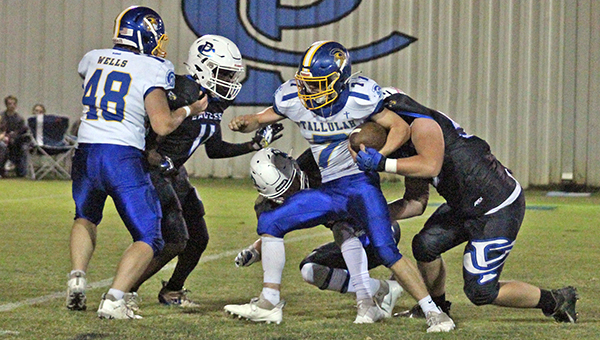 Over the course of nine seasons, Tallulah Academy has established itself as the gold standard of MAIS 8-man football programs. Even after battling through an injury-riddled season that will force them to play from the back of the Class 2A playoff bracket, the Trojans showed Friday why they’re not going to easily give up that distinction.

“We just kept pounding it down the middle. We trusted our guys up front and I think that worked for us best today,” said Machen, who also caught a touchdown pass. “This whole year we’ve been fighting injuries. We haven’t had anybody back all year. We’re at our most healthy right now, and it feels good. It really feels good.”

Tallulah Academy (6-4, 1-2 MAIS District 3-2A), which has played in five state championship games and won three since 2013, earned the No. 9 seed in the Class 2A playoffs that begin next week. Its reward is a return to Vicksburg to face Porter’s Chapel again next week.

“It’s a nightmare,” Tallulah coach Bart Wood said of having to play the same team twice in a row. “Now you’ve sat here and watched everything and have it all on film. We never stopped them hardly. They’re going to be positive. We didn’t come here and kill them. If you do that, you want to beat somebody and take the fight out of them. But I don’t think we did that.”

Porter’s Chapel, meanwhile, still finished the regular season as the No. 8 seed and will get to host a playoff game for the first time in 13 years. The Eagles (6-4, 0-3) will make their first postseason appearance since 2014 and will also finish with a winning record for the first time since 2008.

PCA entered the night as the No. 6 seed, but fell two spots in the bracket with the loss.

“It’s not any more disappointing than the loss in and of itself,” PCA coach Blake Purvis said. “We knew coming in that that was a good football team. I think it’s very possible that our district is going to have at least three in the semifinals of this thing.”

PCA will live to fight another day, but will need to tighten up a defense that was repeatedly gashed for big plays on Friday. Five of Tallulah’s eight touchdowns came on plays of 20 yards or more, and the Trojans had five scoring drives that went 80 yards or more.

Machen scored on runs of 17, 20 and 38 yards, and also caught a 59-yard touchdown pass from Morgan. Morgan added a 36-yard TD pass to Cade Morgan, as well as an electrifying 63-yard TD run in the first quarter.
Dee Morgan finished with 115 rushing yards, and was 5-of-10 passing for 121 yards.

“They were just doing what they do. We had some missed tackles, and we missed a gap or two here or there that turned into some big plays,” Purvis said. “We have to figure out how to get off the field on third and fourth down. That’s the difference in 8-man — you have to play four downs of defense most of the time instead of three downs and a punt. When we get teams behind the chains, we have to capitalize on those opportunities to get stops.”

PCA actually got out of the gate fast, scoring on its first two drives to take a 16-6 lead. Jace Riggs threw a 44-yard touchdown pass to Zach Ashley and Tyler Washington broke off a 16-yard TD run with 3:23 left in the first quarter.

Tallulah regrouped, however, and scored on its last four first-half possessions to take control.

After Dee Morgan’s long touchdown run cut it to 16-14, the Trojans forced a PCA punt and took the lead on the pass from Morgan to Machen.

The ensuing kickoff was an onside attempt that took a very fortuitous bounce for Tallulah. The ball needed to reach the PCA 45-yard line before the Trojans could recover it. It took its final bounce at the 46, then died at the 44 1/2-yard line just before going out of bounds. Tallulah fell on it and scored four plays later on Machen’s 20-yard run to take a 30-16 lead.

The 14-point swing was the difference in the game for most of the way. The teams traded scores once more before halftime, and PCA got a 51-yard touchdown run from Washington on the opening drive of the third quarter to make it 38-30.

Machen’s 38-yard run and a 1-yard run by Arnett Sevier in the fourth quarter swelled the Trojans’ lead to 60-30.

“I kept thinking we’re fixing to get them, we’re fixing to bust it open, and then boom — something happens,” Wood said. “I was just proud of the boys. They played hard. The second half we just did what we did a lot of last year and ran power to see if they can stop it. We thought they were getting tired and we wanted to run the ball, control the clock and get the game on over.”