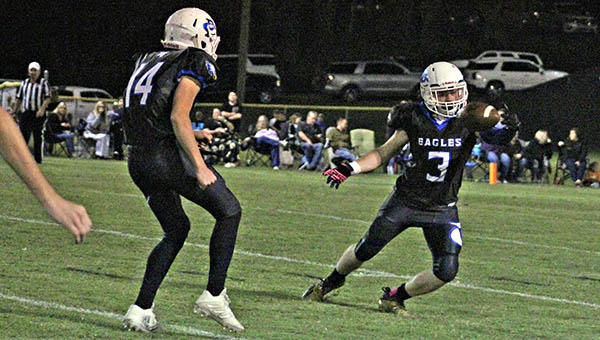 Porter's Chapel Academy's Bridger Jung (3) tries to snatch an onside kick out of the air as teammate Thomas Azlin (14) looks on, during Friday's 60-38 loss to Tallulah Academy. PCA and Tallulah will play again this Friday in the first round of the MAIS Class 2A playoffs. (Ernest Bowker/The Vicksburg Post)

1
Porter’s Chapel Academy will get another shot at Tallulah Academy this week, but it’ll have to wait until next season to end a frustrating streak.

PCA fell 60-38 to Tallulah in the regular-season finale on Friday, for its 12th consecutive loss in a district game. The Eagles have not beaten a district opponent since Week 3 of the 2018 season, when they knocked off Hillcrest Christian 36-0.

Fortunately, the Eagles have ended a lot of other streaks of futility this season that will ease some of the sting. They’ve clinched their first winning season and will play a home playoff game for the first time since 2008, and make their first playoff appearance since 2014.

PCA (6-4) will turn around and play Tallulah Academy (6-4) again in a first-round game this Friday in Vicksburg. It’ll be the second time the teams have faced each other in the postseason. PCA won the last meeting, 10-0, in the first round in 2008.

Tallulah Academy coach Bart Wood said he was not looking forward to the quick rematch.

“It’s a nightmare,” Wood said after last week’s game. “Now you’ve sat here and watched everything and have it all on film. We never stopped them hardly. They’re going to be positive. We didn’t come here and kill them. If you do that, you want to beat somebody and take the fight out of them. But I don’t think we did that.”

2
Mississippi College ranks 161st out of 163 NCAA Division II teams in passing yardage, and did nothing to improve that on Saturday.

The Choctaws rushed for 342 yards, but had zero passing yards in a 41-14 loss to Valdosta State. They threw seven passes, six of which fell incomplete and the other resulting in an interception. Two other dropbacks resulted in sacks.

Mississippi College does rank fourth in Division II in rushing yardage, however, with 1,990, and is also in the top five in rushing touchdowns with 24.

Valdosta State and Mississippi College ran the ball a combined 94 times out of 120 plays in Saturday’s game, which helped it finish in a brisk 2 hours and 34 minutes.

Valdosta State, ranked No. 2 in the AFCA Division II coaches’ poll, is fifth in Division II with 258.8 rushing yards per game.

3
For the first time in his college career, Ben Brown was not in Ole Miss’ starting lineup.

The former St. Aloysius star missed Saturday’s 31-17 victory over LSU with an unspecified injury, ending a streak of 40 consecutive starts at center and right guard. Brown had started every game since the 2018 season opener, when he was a redshirt freshman, and played every snap in the 2020 season.

Four Ole Miss players have started at least 47 games in their career, a number that Brown could have matched had he started every game this season. Although Brown is a senior, he has one year of eligibility remaining because of the extra year granted to all players during the 2020 pandemic season. Brown is an NFL prospect, however, and could elect to turn pro after this season.

Louisiana-Lafayette freshman running back Montrell Johnson scored on a 99-yard run in the first quarter of a 28-27 win over Arkansas State on Thursday.

On Oct. 16, Ohio’s Armani Rogers had a 99-yard run against Buffalo that was the longest in NCAA history by a quarterback.

Rogers’ run was also the first by anyone since 2017, and Johnson’s made this the first time in FBS history that there have been two in one season. The last time there were two 99-yard plays from scrimmage in the same season, either run or pass, was 2014.