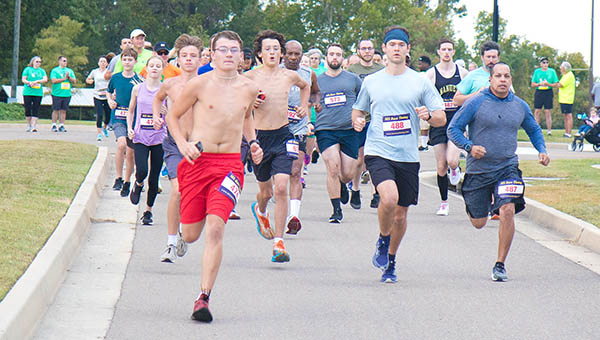 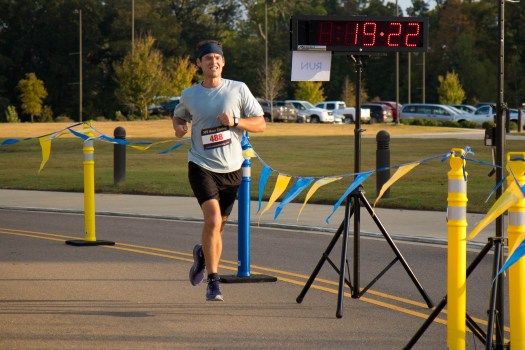 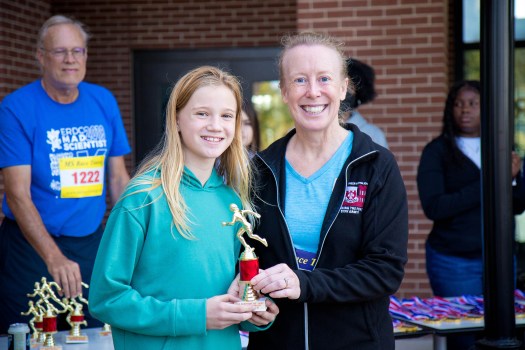 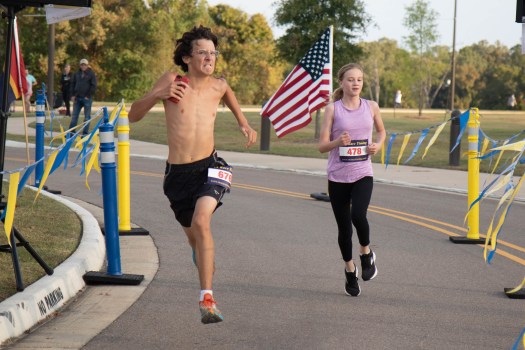 Cora Lindsay, right, crosses the finish line to win the women's championship at the U.S. Army Engineer Research and Development Center Mad Scientist 5K on Saturday. Finishing just ahead of her is Will Bates. (Jared Eastman/ERDC) 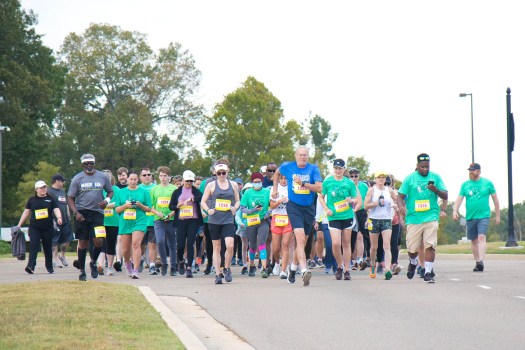 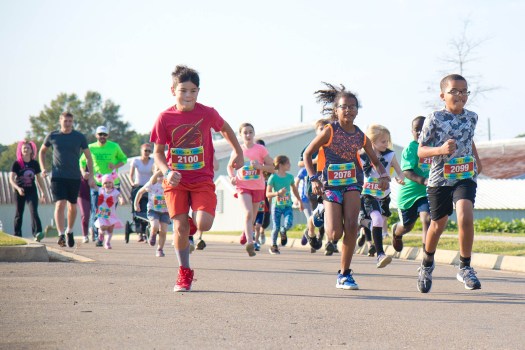 There was no lollygagging in Jacob Lalley’s stride Saturday morning.

The 32-year-old ripped through the field at the Mad Scientist 5K run, besting a field of 60 other runners to easily win the race on the campus of the U.S. Army Corps of Engineers’ Engineer Research and Development Center.

Lalley won with a time of 19 minutes, 23 seconds, exactly 30 seconds faster than runner-up Holt Pownall and a minute and a half ahead of third-place finisher Andrew Klock.

Lalley is the third different winner in the four editions of the race that began in 2017. It was not held in 2020 because of the COVID-19 pandemic.

Cora Lindsay, 11, won the women’s championship with a time of 23:39. She finished 15th overall, and nearly three minutes ahead of the women’s runner-up Denise Lindsay.

In the 5K race walk, Angel Curry barely edged past runner-up Steve Pranger to win the overall championship in the latest chapter of their long-running duel. Curry clocked a time 32:16, and Pranger was seven seconds behind.
Pranger won the men’s title, but had his reign as the Mad Scientist’s king come to an end. He had won the overall title in the first three editions of the race.

Curry won the women’s title in 2017 and 2019, and finished second overall behind Pranger in both of those years. All three of their duels were decided by less than a minute. Curry did not compete in the 2018 race.

In the children’s 1-mile fun run, 10-year-old Mason Bourne claimed the top prize with a time of 7:29. Ryleigh Grace Brown, 9, won the girls’ title and was second overall in 7:45, and Margaret Winters was third overall in 9:04.

The Mad Scientist 5K was the second of three running events in Vicksburg in October. The Over the River Run was held two weeks ago, and next Saturday brings Vicksburg Catholic Schools’ Spooky Sprint 5K through the downtown area.

The registration fee for the Spooky Sprint 5K is $35, and online registration is available at https://vicksburgcatholicschool.redpodium.com/2021-spooky-sprint.

A brief pause in the schedule follows the Spooky Sprint, before another holiday-themed race picks up where it left off. The Reindeer Run 5K is scheduled for Dec. 4, at Catfish Row Art Park at 8 a.m. All proceeds benefit PAWS Rescue. The registration fee is $30 and is available online at raceroster.com/events/2021/53926/reindeer-run-5k