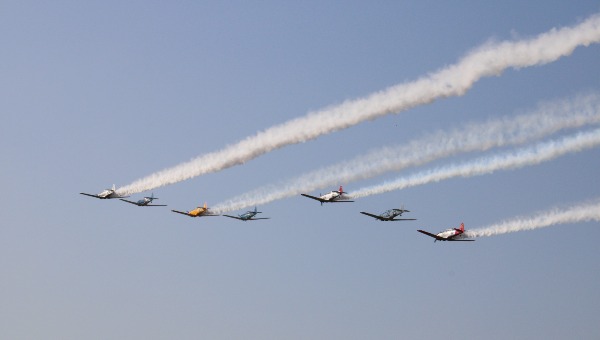 MOUND, La. — Danny Johnson had his camera ready as he sat in his chair behind the orange fence separating the public from the runway airplanes were using to taxi back to their spot on the tarmac after their flight.

“I just like planes in general,” he said as he waited for a vintage warbird to fly by. As one passed or came in range, he pulled his camera up to get a shot, panning the camera to catch the speeding plane.

“I support it every year,” Johnson said.

Another person watching the show was William B. Mitchell, 96, of Tallulah, La., a World War II veteran who served in the then-U.S. Army Air Corps.

Mitchell was a mechanic and a sergeant in the 2300 Quartermaster Trucking Company.

“It was a good unit,” he said. “We had a weapons carrier, a jeep and 16 six-bys (trucks). We worked on vehicles but we serviced the planes with supplies.”

Mitchell said it was the warbirds that brought him to the show.

“The P-51, AT-6 Texan; we had those when I was in training at Kelly Air Force Base in San Antonio (Tex.),” he said, “I did my basic training at Keesler in Biloxi.”

She estimated more than 1,000 people also attended the twilight show Friday, adding, “I know in the VIP area last night we had 650 people.”

The crowd for the show was disbursed across the airport property, covering the airport tarmac from a line of barricades separating the planes preparing to take off east to a recently cleared cotton field adjacent to the airport that was being used as a parking area.

At about 12:30 p.m., the Aeroshell Aerobatics team attracted everyone’s attention to the sky, where the four red-and-white AT-6s performed loops and rolled across the sky.

Besides watching the planes on the ground and those performing in the air, people attending the show also toured an exhibit of military vehicles, enjoyed a car show presented by the Vicksburg Cruisers, which featured several rows of cars lined up for inspection by visitors, and took rides on the foundation’s Waco biplane.

One of the cars, a 1968 Volkswagen van, drew a lot of attention from people, including Robert Touchstone and his granddaughter Sara.

“We came here for the airplanes and the cars and to ride in the Waco,” he said.

Touchstone spent a lot of time looking at the van and talking with its owner, Bill Wise from Lake Providence, La., but said his interest was curiosity. “I’m a hot rodder,” he said.

And his ride in the Waco?

“It went great; I would recommend it to anybody,” he said.

Sara was more basic about her ride in the biplane, “It was good; I’d do it again.”

Van owner Bill Wise said he has owned the Volkswagen for seven years.

“It has a history,” he said. “It was bought in Monroe in 1968 and has spent all its life in Lake Providence. My parents drove it to Vicksburg and other places to go square dancing.”

He said he later bought the van from a friend who was keeping rocks in it and had it restored.

“We spent a lot of money to restore it because of the sentimental value,” he said.

While Wise was telling people about his van, Jacqueline and Michael Hankins and their sons from Newellton were seated along the runway waiting for the performance by the Aeroshell Aerobatic Team.

“We all love airplanes, especially our 4-year-old,” Jacqueline said.

“I’m learning to fly and getting my pilot’s license,” Michael said. “My instructor is from Vicksburg — Ron Davis. I’m close; I have a few hours more.”

And does that mean he’ll be doing acrobatics in the air?

“He wants to be over there,” his wife said, pointing to the warbirds.