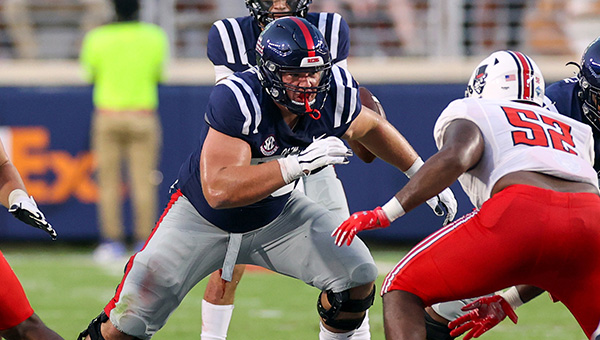 Ole Miss offensive lineman Ben Brown sets up to block earlier this season against Austin Peay. The former St. Aloysius star will miss the rest of the season after having surgery to repair a torn bicep muscle. (Joshua McCoy/Ole Miss Athletics)

First, Ben Brown’s streak of 40 consecutive starts ended. Then, it was his season.

The Ole Miss offensive lineman and former St. Aloysius star had surgery Tuesday to repair a torn bicep tendon in his left arm, he announced. He will miss the rest of the season, and his college career appears over as well.

Brown told 247sports.com that the injury occurred late in the Rebels’ 31-26 win over Tennessee on Oct. 16.

“It was a distal bicep tendon tear,” Brown told 247Sports.com. “It tore completely off the bone in the Tennessee football game. It was obviously very painful, but I just didn’t have any function. I tried practicing on it last week and I couldn’t use my arm. The best plan was for me to go and have the surgery and let it get better and let it heal.”

Brown had started every game of his college career at Ole Miss — 40 in all — before missing the Rebels’ 31-17 victory over LSU last Saturday. The streak included starts at right guard and center. He made the Southeastern Conference All-Freshman team in 2018, and was a preseason All-SEC selection this season.

During his remarkable streak of starts, Brown was one of the most durable and consistent players on Ole Miss’ offensive line. He played nearly every snap in both 2019 and 2020.

Brown is considered a prospect for the 2022 NFL draft, but it’s unclear how the injury will affect his stock. He told 247sports.com that the injury is expected to take 4 to 6 months to recover from. The far end of that range would roughly coincide with the draft in late April, and would likely mean he would miss most of the pre-draft workouts.

Brown is classified as a senior, but does have one more year of college eligibility remaining because of the extra season granted to players during the COVID-19 pandemic in 2020. In a post on his Instagram page, however, Brown indicated that he would not return to Ole Miss in 2022.

“It is with great sadness that I must announce that I have played my last game as an Ole Miss Rebel,” Brown wrote. “I never (imagined) that my time as an Ole Miss football player would end so abruptly, and it causes me great pain not to be able to finish this amazing season alongside my brothers. Even so, God is good. I had surgery today and begin a long recovery process. Please keep me in your prayers for the road ahead.”

“I will be forever grateful for the honor and privilege to don the Red and Blue to represent Ole Miss, the great state of Mississippi, my hometown of Vicksburg, and the St. Al Flashes!” he wrote. “It has been a dream come true for me, and I have truly had the time of my life!”