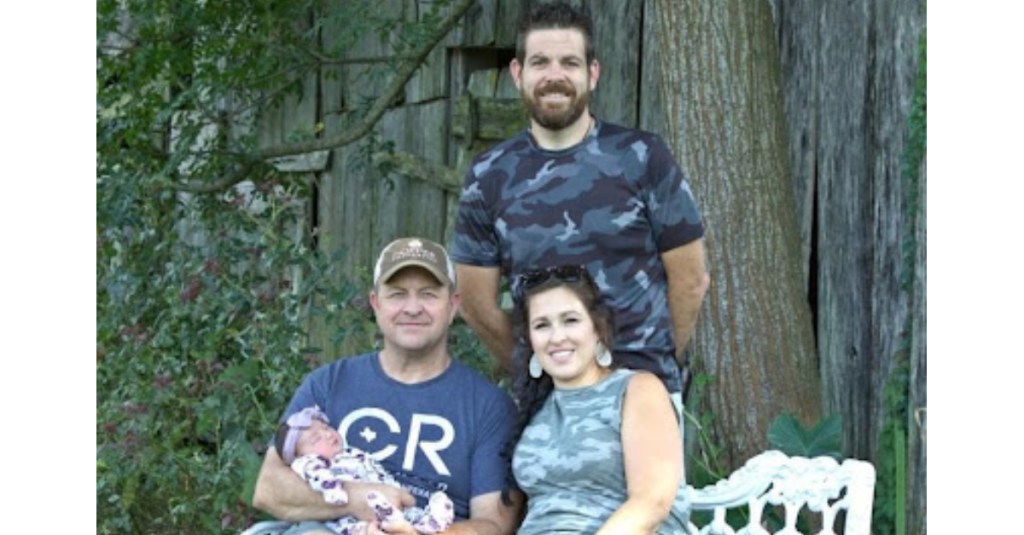 In the early morning hours of Sept. 5, 2021, Dustin and Ashley Smith, evacuees from Lafitte, La., welcomed a new baby girl in the bathtub of a friend’s house; then everything took a turn.

Most people are not surprised when they hear of National Guard forces responding with support efforts including engineers, aviation capabilities, military police and communication support, but sometimes, when you least expect it, a hero emerges when you need them the most. That is exactly what happened to the Smith family when Polk delivered their baby and saved the lives of the mother and the newborn child.

The journey started Aug. 27, 2021, as the city of Lafitte, La. was preparing for the wrath of Hurricane Ida. Ashley was expecting her fourth child and deliberating over the best course of action to safely evacuate her family while preparing to deliver her baby during the COVID-19 pandemic. Ashley’s family is from Indiana and, anticipating a difficult drive to reach them at 38 weeks pregnant, she realized she needed to explore other options. That is when a good friend, Brandi Arcement of Benateri, La., called and invited Ashley, Dustin, their three children and the family dog to stay with her parents, Craig and Karry Degruise, of Bolton. The following day, the Smith family, along with Brandi and her children, arrived safely to the Degruise family home to wait out the storm.

On Aug. 29, Hurricane Ida made landfall at Port Fourchon, La., as a Category 4 hurricane, just miles from where Hurricane Katrina left its mark exactly 16 years earlier. The storm devastated the Smiths’ hometown and caused severe damage to their home, leaving them in Mississippi. They were safe with friends and anxiously awaiting the time to safely welcome their new baby.

In his civilian capacity, Polk is a surgical recovery room nurse at Baptist Hospital in Jackson, Miss., and a neighbor of the Degruise family in Bolton. On Sept. 2, Karry invited Polk over to visit with Ashley and Dustin to answer questions, offer reassurance and discuss options for a birth plan in case she went into labor. Ashley was considering a home birth due to her fears of COVID-19 and the restrictions in an unfamiliar hospital setting. It was her fear that the family would be separated or prevented from seeing each other due to the pandemic.

“I believe things happen for a reason,” Ashley said. “I am good friends with their daughter Brandi, and Karry and Craig welcomed us like family. This was the best birth experience my husband and I had out of all four of our children.”

Ashley went into labor on Sept. 4. She started timing her contractions a little after 11 p.m. and woke her husband up by midnight to tell him the contractions were coming faster — about two minutes apart. She woke up the host family and explained she didn’t think she would make it to the hospital in time. Karry sprang into action, called Polk and started bathwater. Ashley’s plan included a water birth.

“He [Polk] just rolled up his sleeves and jumped into action,” Karry said. “He knew exactly what he needed to do and he got to work.”

Polk had experience with labor and delivery while serving on active duty as a nurse at Keesler Air Force Base in Biloxi. His medical experience under pressure while deployed to Iraq as an Air Force Flight Nurse, prepared him for the events that happened that day.

“My military training helped me stay calm,” said Polk. “My job as a Critical Care Air Transport Team (CCATT) nurse during deployment was the best job I’ve ever had in the military. There is no higher honor than treating someone who is protecting our freedom. It is rewarding knowing you made a difference.”

Polk sat on the side of the bathtub and calmly talked Ashley through the birth. The labor was fast and at 12:30 a.m. Julia Lane Smith was born.

Ashley was anxiously awaiting the sound of the first cry of her newborn baby girl. When the infant was born, Polk immediately assessed her well-being without causing alarm for the new parents. The baby’s color was blue and Polk was doing everything he could to get the baby to breathe. He began giving her rescue breaths and was able to stabilize the newborn.

Polk explained that everything was going like it was supposed to after the baby started breathing. They used a zip-tie to clamp the umbilical cord and kitchen shears to cut the cord. He got everyone cleaned up and was letting the new mom relax in the tub before trying to get her out.

Ashley stayed in the tub for about an hour resting. When she tried to get out of the tub, she got weak, explained Polk.

“Ashley’s pulse was faint and thready. She started turning blue and she passed out,” said Polk. “She was slipping down into the tub. Dustin grabbed her and was holding her while I gave her five rescue breaths. I remember saying before I gave her the rescue breaths, ‘I am not trying to kiss you. Come on, you can do this.’ At first, she was not responding. I was getting ready to start CPR when Ashley came to saying, ‘I was only taking a nap.’”

Polk stayed with the family for a while to monitor Ashley and her newborn. He continued to check on the Smith family the following days to ensure everyone was doing well. During one of the follow-up visits with the family a few days later, Ashley told him about her fear before the birth.

“It was a wish of mine to do an at-home birth in the midst of the COVID pandemic,” Ashley said. “Before the birth, I had a feeling and was so afraid that we wouldn’t make it through this. Kevin showed up 100 percent. He was calm and at no point did I feel stress or worry. He did a phenomenal job keeping me calm.”

The Smiths and the Degruises said they are extremely grateful for the exceptional outcome.

“There is no monetary value, enough gratitude or gifts that I can ever give Kevin, Karry and Craig to express how thankful my husband and I are for that whole experience. I feel like Angels were put in my path to help in a situation that was crazy all around us,” Ashley said.

Polk summed up his experience saying, “Anytime you feel like you are a part of saving a life… it is the best feeling in the world.”

The Smith family is currently in the process of rebuilding their home due to the damage caused by Hurricane Ida.