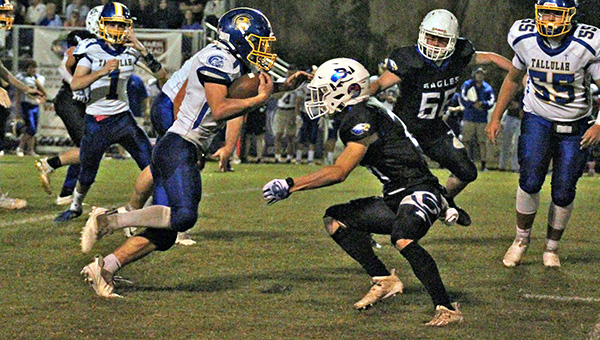 When the MAIS Class 2A playoff bracket was finalized, it offered Porter’s Chapel Academy either a difficult path or an opportunity to go on a revenge tour.

It wasn’t hard to see which one coach Blake Purvis thought it was.

“We’re on redemption road,” Purvis said. “It’s very likely if we win and advance, week to week we’re going to get another shot at all four teams that beat us this year. I don’t think anybody else in the playoffs has that draw.”

Well, there is one. And that’s the first one the Eagles will have to conquer.

PCA (6-4) will host Tallulah Academy (6-4) in a first-round game Friday night. It’s a rematch of last week’s regular-season finale that Tallulah won 60-38, as well as PCA’s first playoff game since 2014.

Friday’s winner will advance to play top-seeded Manchester Academy (9-1) next week. PCA and Tallulah both played Manchester in the regular season, as well as potential semifinal and championship game opponents Claiborne and Prairie View.

“It’s tough to beat a good opponent two times in a season. I guess us knowing what we have to do, what we have to improve on, and being better in different areas of the game, maybe will be a benefit for us,” Purvis said.

The sudden rematch adds an unusal twist to Friday’s game. Both teams had something to play for last week, so both got a good look at the other’s best effort. Although Tallulah won by 22 points, it was much more competitive than that. The score was 38-30 with about four minutes left in the third quarter, and the Trojans blew it open by scoring on three consecutive possessions.

“Practice is so monotonous because we’re prepaing for the same team again. The boys are really in good spirits, but as a coach we’re trying to tweak little things here and there. So practice is not like it normally is,” Wood said. “We know what kind of game it’s going to be. It was a good game last week and it’ll be a good game this week. If we’re not ready, they’ll beat our butts.”

Likewise, Purvis felt Round 1 of Eagles-Trojans was an even match. PCA had a 10-point lead in the first quarter and scored three touchdowns of 39 yards or longer. Cleaning up a few mistakes, Purvis said, should be enough to give his team a chance this time.

“In a game like this, I feel like we’re the exact same team. We’re playing against ourselves. It’s as even as even can be. We’ve got to take advantage of opportunities to get off the field on defense, and then not put ourselves behind the chains on offense,” Purvis said. “I thought that was the difference in the game. When we got behind the chains they were able to take advantage of that and get off the field, and likewise for us, when we got them behind we couldn’t get the stops. We have to do a better job with that.”

Being in the playoffs is new territory for Porter’s Chapel. None of its current players have played in a postseason game, and Purvis has never coached in one.

Tallulah has a strong tradition — it has played in five state championship games in eight years, including 2020 — but few members of its current roster were contributors on those previous teams.
Purvis wasn’t sure if inexperience will be a factor, but hoped having home field advantage helps if it is.

“I hope edging out and getting that home playoff game will curb that a little bit. It’ll be a familiar environment to those guys, hopefully, and prevent the starstruck aspect of it,” Purvis said. “That’s what we’re facing this week, though. We’re a team that hasn’t been here, and you’re going up against a team in the first round that won three state championships and played for two more in the last seven years. History is against us, but at the end of the day nothing changes about the game. You’ve still got to play four quarters and play an opponent. The game itself should be the same. We just have to treat it that way.”

A bigger advantage for Tallulah might be the knowledge of how to prepare for playing a team a second time. On most of its runs through the playoffs it has faced at least one opponent that it saw in the regular season.

“For the last four or five years we’ve had to play (Briarfield) in the playoffs. We won just as many as we lost to them. There was one time it was definitely their year and we beat them,” Wood said. “You never know when you get to the playoffs. That’s what you’re scared of, is that happening for one night.”