Warren Central on a roll as Petal comes to town 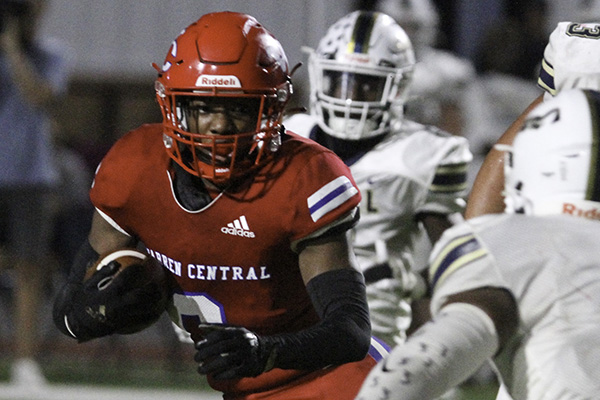 Warren Central is still walking a wire while chasing a playoff berth in Region 3-6A, with no margin for error and enemies from all sides trying to knock them off.

The situation, however, has certainly improved in a hurry.

Back-to-back victories over Pearl and Terry not only kept the Vikings alive, they moved them into the conversation and renewed some lost swagger. They can take another step in that direction this week as well, when Petal (3-5, 1-4 Region 3-6A) comes to Highway 27 for what amounts to another elimination game for both teams.

Warren Central (5-3, 2-3) will go into next week’s regular-season finale at Meridian (6-4, 2-3) with a chance to reach the playoffs whether it wins or loses against Petal. The difference is, beating Petal allows the Vikings to maintain control of their fate rather than having to rely on help and favorable tiebreakers.

If Warren Central wins its last two games, it could finish as high as third in Region 3-6A.
That hardly seemed like it would be the case after three straight losses to start region play, but the Vikings have done a 180-degree turn in their last two games. They shut out a Pearl team that averages 36 points per game, and followed it up with a 31-0 win over Terry.

Warren Central did not punt and forced three turnovers against Terry, in what Morgan called the team’s most complete game of the season. Jack Wright threw two touchdown passes, and the team’s four touchdowns were scored by four different players.

Morgan attributed the recent turnaround to a renewed sense of urgency.

Up next is a Petal team struggling through an uncharacteristically bad season. Petal has played in two Class 6A championship games in the past 10 years, reached the semifinals in 2019, and has not won less than six games in a season since 2007.

Petal’s 13-year streak of playoff appearances is second only to South Panola’s 19 among Class 6A teams. Warren Central is third on that list with nine consecutive appearances.

Petal beat Northwest Rankin two weeks ago, however, and lost a close 31-28 game to Meridian in its last outing. Morgan said that shows both the Panthers’ potential and the razor thin margin between success and failure in Region 3-6A.

This is only the second time Warren Central and Petal have played each other. The first was in the 1980 Jaycees Bowl in Ellisville, which Petal won 9-0.

Because of the unfamiliarity between the programs, Morgan said he was more aware of Petal’s recent reputation than the intricacies behind this year’s downturn. He said their history over the past 10 or 15 years, however, and some raw talent makes them an opponent not to overlook.

“Petal has been one of those schools that always plays good ball,” Morgan said. “They’re well-schooled and have good athletes. We have a lot of respect for the program even though I don’t think we’ve ever played. They’ve always been right there in the thick of things.”