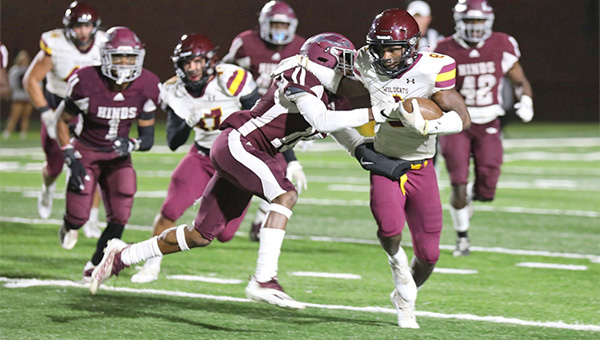 POPLARVILLE — Hinds Community College finished the regular season on a roll that will carry it right into the MACCC playoffs.

Jeffrey Pittman rushed for 210 yards and three touchdowns as No. 11 Hinds beat Pearl River Community College 21-10 on Thursday for its fourth consecutive victory.

Hinds (7-2, 5-1 MACJC South) clinched a spot in the MACCC playoffs with the win. It will face top-ranked and undefeated East Mississippi on Nov. 6 at 2 p.m. in Scooba. Northwest Mississippi and Jones College will play in the other state semifinal.

It is Hinds’ first playoff appearance since 2017. It has not reached the championship game since 2004, and its last state title was in 1997.

Pittman has been Hinds’ offensive workhorse all season, and carried the load again on Thursday. He ran the ball 29 times — Hinds only ran 48 offensive plays — and scored on runs of 9, 5 and 1 yards. The last touchdown put the Eagles ahead 21-3 early in the third quarter.

Pearl River’s Tony Brown rushed for 149 yards and a touchdown, and the Wildcats (2-7, 0-6) had 247 rushing yards as a team. Quarterback Will Young, however, was 0-for-5 passing with one interception.

East Mississippi finished its fifth undefeated regular season in the past 11 seasons, and won its 10th division title under head coach Buddy Stephens. The Lions will host Hinds in the MACCC semifinals next Saturday.

Along with completing 18 of 29 passes for 177 yards and two touchdowns, Jones was EMCC’s leading rusher in the game with 49 yards on eight attempts. Zias Perryman and Amariyon Howard followed with 48 and 39 rushing yards, respectively. Perryman and Howard also each scored a touchdown.

Itawamba’s touchdown came on a 100-yard interception return by Ralph Dunn in the final minute of the game. East Mississippi had scored 31 straight points before that.

Jones won its third division title in six seasons and will host Northwest Mississippi in the MACCC semifinals on Nov. 6 at 2 p.m.

After a scoreless first half, Hawkins threw a 33-yard TD pass to Henry and a 60-yarder to Bud Tolbert to put Jones ahead 14-0 with 8:55 left in the third quarter.

Co-Lin answered with a 5-yard touchdown pass from Paul Hargrave to Tyquan Henderson on its next possession, but Paul Hughes II scored on a 3-yard run early in the fourth quarter to give Jones a 21-7 lead.

Hargrave completed 10 of 25 passes for 122 yards, with one touchdown and two interceptions for Co-Lin. The Wolves only had 31 rushing yards and 186 yards of total offense.

Williams finished with 132 yards and Bracey with 108. The Rangers had 299 rushing yards as a team, and cruised after taking a 37-13 lead into halftime. Quarterback Michael Hiers scored on an 18-yard run in the first quarter and threw a touchdown pass in the second.

Another former Viking, defensive back Tevin Bell, had four tackles and one pass breakup for Northwest.

Northwest Mississippi is the No. 2 seed from the North Division and will travel to play Jones College in the MACCC semifinals on Nov. 6.

Holmes had 209 yards of offense and fumbled nine times — it lost four — in a game played in a steady rain in Goodman. One of Holmes’ fumbles resulted in a safety

Javontae Matthre and Jordan Willis each scored a rushing touchdown for the Bulldogs.
Northeast Mississippi fumbled three times, but did not lose any.

Coahoma led 12-0 at halftime after Jakobi Jackson scored on a 19-yard run and Kennique Bonner-Steward threw a 5-yard TD pass to Trayvon Moore.

Bonner-Steward was 16-of-36 passing for 154 yards and a touchdown, and added 80 rushing yards for Coahoma. Jackson carried the ball 13 times for 60 yards and two TDs.

Jaren Van Winkle kicked a 39-yard field goal and Larry Wilson had a 4-yard TD run for East Central in the fourth quarter.

East Central won despite being outgained 377 yards to 147.