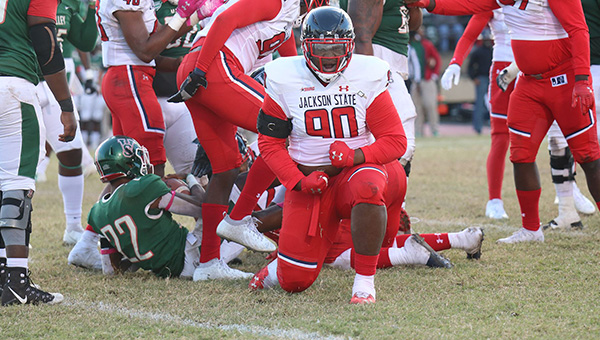 ITTA BENA — Deion Sanders was absent from the sideline again for Jackson State. Luckily, another Sanders was there to pick up the slack.

Deion Sanders did not coach Jackson State (7-1, 5-0 Southwestern Athletic Conference) as he continues to recover from a recent foot surgery.

Shedeur Sanders completed 18 of 31 passes for 257 yards with two interceptions and was sacked twice. Two of his touchdown passes came in the second half, after Mississippi Valley State (2-6, 1-4) had taken a 12-7 lead on Jalani Eason’s 23-yard touchdown pass to Datavio Porter.

Jackson State regained the lead on a 41-yard touchdown pass from Sanders to Malachi Wideman. Later in the third, Young returned a fumble 26 yards for a touchdown and a 21-12 lead for the Tigers.

Early in the fourth quarter, the Delta Devils drew within two points on a 1-yard run by Caleb Johnson before Jackson State responded with a 74-yard TD pass from Sanders to Trevonte Rucker to close out the scoring with 11:14 remaining.

Eason was 14-of-26 passing for 125 yards with the one touchdown and four interceptions.
Jackson State beat its in-state rival for the seventh consecutive time, and 61st time in 70 meetings all-time.

Alcorn State’s Felix Harper tossed a 14-yard touchdown pass to CJ Bolar that tied the game 35-35 with about a minute left. On the ensuing series, Glendon McDaniel completed 4 of 5 passes to set up Jackson’s game-winning kick.

McDaniel was 20-of-34 passing for 258 yards and one touchdown. Jerodd Sims added 74 rushing yards on 22 carries, including three short-yardage touchdown runs.

Harper threw for 206 yards and four touchdowns to lead Alcorn State. Each of Bolar’s two catches were for scores. Niko Duffey added 128 rushing yards, with a 7-yard touchdown.

Delta State 14, Shorter 13
Deion Dampier ran for 152 yards and two touchdowns, including a 91-yarder midway through the fourth quarter that allowed Delta State (4-5, 2-4 Gulf South Conference) to escape with a win over Shorter College (2-7, 0-6).

Rico Owens II also ran for 104 yards for Delta State, which had 256 on the ground as a team. Shorter had 156 total yards, but scored on a blocked punt and a 25-yard touchdown pass from Aeneas Dennis to John Dietl III in the first quarter to jump out to a 13-0 lead.

Dampier scored on a 20-yard run in the second quarter, and his long touchdown in the fourth put the Statesmen ahead for good. Shorter had one first down on three possessions after Dampier’s final touchdown.

Six of Delta State’s nine games have been decided by seven points or less, and in four of those the winning points have been scored in the fourth quarter or overtime.

Davis ran for 49 yards and three touchdowns, and added two TDs through the air. He was 19-for-32 passing with 320 yards. His 11-yard TD pass to Xavion Butler with 5:18 left in the second quarter put the Majors ahead 28-6.

Sophomore wideout Temias Mason had seven receptions for 186 yards. He caught an 83-yard touchdown from Davis on the Majors’ third play from scrimmage.

Michael McGhee ran for 149 yards and three touchdowns for Sewanee, and Cochran Smith had 92 yards and a touchdown.

McGhee’s 51-yard touchdown run with 6:15 left in the fourth quarter cut it to 35-32, but the Majors responded with a nine-play, 65-yard drive capped by Davis’ 1-yard run on fourth-and-goal to seal it.

No. 2 Mary Hardin-Baylor sacked Belhaven quarterback Mayowa Asagunla three times and intercepted him once. Asagunla was 15-of-27 passing for only 137 yards, and also ran for a team-high 63 yards.