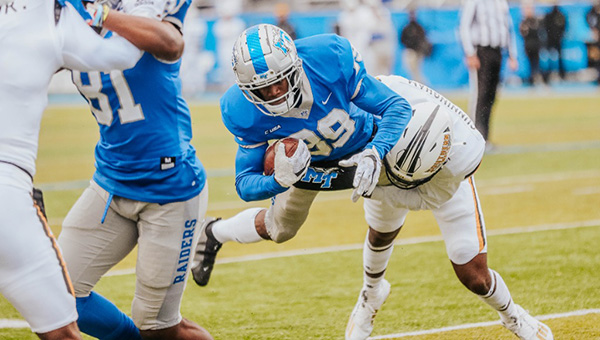 Southern Miss’ defense turned in a respectable performance on Saturday by holding Middle Tennessee to less than 300 yards and two scoring drives, while forcing four turnovers.

By the time it came up with a goal line stand in the final minute of the game, however, the offense and special teams had done their part to make sure it didn’t mean much.

Middle Tennessee quarterback Mike DiLiello, who replaced injured starter Chase Cunningham, was only 8-of-12 passing for 78 yards but ran for 77 yards and two touchdowns. His 6-yard TD run late in the first quarter was the first of three that the Blue Raiders (4-4, 2-2 Conference USA) scored in a span of 3 1/2 minutes to go from down 7-0 to a 21-7 lead.

A minute after DiLiello scored with 1:14 left in the first quarter, Middle Tennessee blocked a punt and Tra Fluellen returned it 18 yards for a touchdown. On Southern Miss’ next possession, quarterback Jake Lange was sacked and fumbled, and Jordan Branch returned it 29 yards to the end zone.

DiLiello added a 14-yard touchdown run in the third quarter, and Mississippi native D.Q. Thomas returned an interception for a 43-yard score with 26 seconds left in the period.

“I thought we harassed them. I thought our defense was really, really outstanding tonight,” Middle Tennessee coach Rick Stockstill said. “The pressure the front put on, the guys that made plays, those guys really played well.”

Thomas’ interception return was the fourth of five USM turnovers, and the second of three interceptions by its quarterbacks. Lange threw two while going 16-for-34 for 166 yards, and Tee Webb had the other while completing just 2 of 6 passes for 18 yards. Jake Smithhart also saw playing time behind center in mop up duty.

Lange threw an early 13-yard touchdown pass to Jason Brownlee, who caught nine balls for 120 yards. The touchdown with 7:47 left in the first quarter put Southern Miss ahead 7-0 and marked the first time they have held a lead since being ahead 3-0 early in the third quarter against Troy on Sept. 18 — a span of 17 quarters.

Frank Gore Jr. had 83 rushing yards on 20 carries for the Golden Eagles.

Defensively, Santrell Latham had seven tackles and recovered two fumbles, and Eric Scott intercepted a pass. The Golden Eagles also stopped the Blue Raiders at the goal line on a clock-killing drive in the final seconds of the game.

The turnovers and points that the offense gave away were too much to overcome, though. The Golden Eagles lost 61 yards on seven sacks. They ran 82 plays compared to 56 for Middle Tennessee, but were outgained by 53 yards.

“I thought we played really hard on defense. We didn’t even give up 300 yards of offense. I thought offensively we were able to control the time of possession, and we ran the football a lot better, particularly in the first half,” Hall said. “We’re just not a bonafide D-I college football team right now, but we are gonna be. I can promise you we will be here very very soon.”