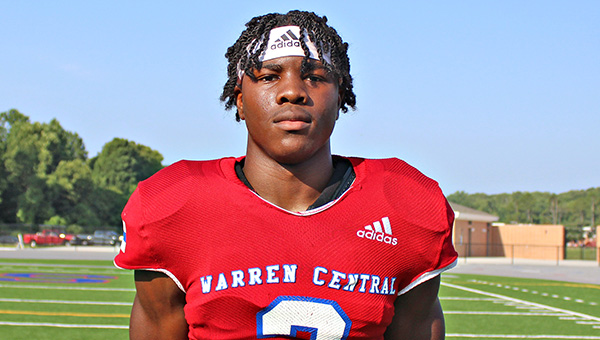 Warren Central has not only resurrected its playoff hopes just in time for Halloween, it’s starting to look like it might be a team to reckon with once the calendar flips to November.

T.J. Thompson scored four rushing touchdowns, Ashton Murphy returned a blocked punt for a score, and the Vikings’ defense shut down another opponent as they defeated Petal 42-13 on Friday night.

“We’re getting better every week. We’re getting more experience and fixing more problems. The more we win, the bigger the next game gets and it puts us in a better position,” Warren Central coach Josh Morgan said. “But we’ve not been able to let up at all, and I think that’s good. These are must-win games we’ve been playing. We’ve been able to be at our best when we’ve needed it, and hopefully we’ll be able to continue that trend.”

Warren Central (6-3, 3-3 Region 3-6A) won its third game in a row after losing its first three in region play. It’ll go into the regular-season finale at Meridian with a chance to not only make the playoffs, but earn the No. 3 seed.

Meridian was upset by Terry on Friday, 29-28, leaving Warren Central all alone in fourth place. The top four teams in each region qualify for the playoffs. WC would get into the playoffs with a win, and finish third in Region 3-6A with a win and a Pearl loss to Brandon.

“We’re still in control of our own destiny. You can’t ask for much more than that this time of year. It’s a spot you want to be in,” Morgan said. “After the Northwest Rankin game we were sitting there at 0-3 and just knew if we could keep the team together we’d be OK. It’s been one of the great things to see, as far as turning things around and getting on a run, it makes me extremely proud of our kids, the coaching staff, the culture of our program, because it’s not easy to do.”

Warren Central’s hopes for a third consecutive shutout ended early Friday when Ryan Poole scored on a 5-yard run on the game’s opening drive to give Petal a 6-0 lead.

The Vikings, though, dominated the rest of the game.

Thompson scored on a pair of 2-yard runs before halftime, and midway through the third quarter Jaevion Mims blocked a punt that Murphy returned 25 yards for a touchdown and a 21-6 lead.

“It allowed us to catch our breath, and having a two-score lead was really big,” Morgan said of the blocked punt. “Once that happened, we were really able to calm down and play football. Any time you block a punt it’s a huge momentum swing. And not only did we block it, we scored. It was a really big play.”

Thompson added two more touchdown runs, of 11 yards late in the third quarter and 1 yard early in the fourth, to make it 35-6. Petal did not score again until Kayden Burger’s 4-yard run with 5:53 remaining, and by then the outcome had long been decided.

A 5-yard run by freshman running back Decorey Knight with less than a minute to go accounted for Warren Central’s last touchdown.

Warren Central has allowed only 13 points in its last three games, after giving up 106 in the three before that.

“We played well again defensively. We played well as a team, as a unit,” Morgan said. “We locked in to the game plan and were able to get some stops and get off the field. We were a lot better on third down and had some turnovers that helped to not let them get anything going.”