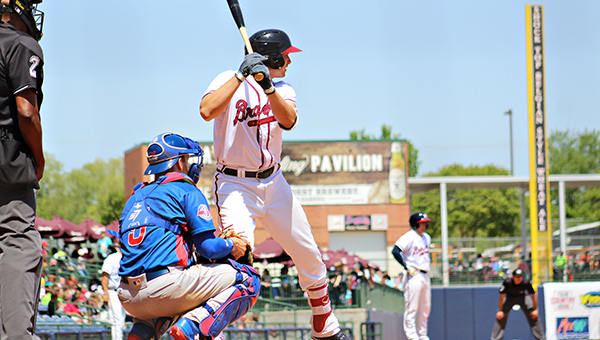 Austin Riley bats for the Mississippi Braves during a game in 2018. The Mississippi native is one of 11 former M-Braves playing for the Atlanta Braves in the 2021 World Series. (Ernest Bowker/The Vicksburg Post)

Minor league baseball is a weird version of the Great American Pastime.

Unlike most other sporting events we consume, the end result doesn’t really matter. For players, it’s more about individual performance and advancing to the next level. If you’re any good, you don’t stay in one place long. You might even play for two or three teams in the same season.

For fans, it’s often that night’s entertainment and nothing more. We cheer on the local team, but don’t live and die with them like we do college and major league teams. The bigger satisfaction comes from seeing the guys we watch tonight reach the majors and become stars a year or two down the line.

It’s that last thought that was on my mind as I watched the 2021 World Series this week. The Atlanta Braves are in it for the first time since 1999, playing against the Houston Astros, and there are a lot of players we can look at and say, “Remember when …”

Warren County baseball fans got an even earlier look at Riley. He was on the DeSoto Central team that beat Warren Central in the quarterfinal round of the 2015 MHSAA Class 6A playoffs. Riley pitched six innings and hit a home run in an 8-1 win in Game 1 of that series at Viking Field.

The Braves made Riley a first-round draft pick about six weeks later. He passed through Pearl two years after that, got called up to the majors in 2019, and hit 33 home runs as the Atlanta Braves’ starting third baseman in 2021.

The Atlanta Braves have always used Mississippi as a steppingstone to the big leagues since they moved the Double-A team here in 2005. A total of 152 players have passed through Trustmark Park on the way to the majors, with more than a few getting direct call-ups.

It’s made Mississippi the gateway to the majors, at least for one franchise. It also firmly makes Mississippi — or this part of it, at least — Braves country.

Other MLB teams certainly have a presence around here. The St. Louis Cardinals had a radio affiliate with 1490 AM for many years, and there are even some Astros fans floating around. The American League champs have some regional appeal, as well as semi-local ties with pitcher Kendall Graveman (Mississippi State) and third baseman Alex Bregman (LSU).

None right now, however, have the number of players we can look at and say, “I saw that guy play here!”

It’s a special bond that might have meant nothing to anyone in the moment, but it’s worth celebrating now. Whether you like them or another squad, the Braves are Mississippi’s team.