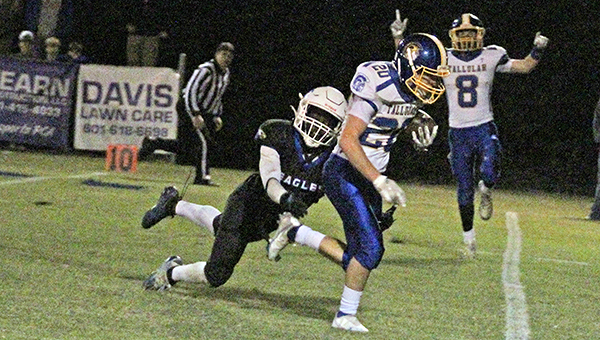 1
Since moving to the MAIS’ 8-man football division in 2014, Tallulah Academy has never been an easy out in the playoffs. Its latest outing continued the trend.

Tallulah escaped with a 44-36 win over Porter’s Chapel Academy in the first round of the Class 2A playoffs Friday night, marking the seventh time in eight seasons that the Trojans have won at least one game in the postseason.

Tallulah (7-4) advanced to play Manchester Academy (9-1) in the second round this Friday, at 7 p.m. in Yazoo City.

“When we start the season, we expect to be here. We expect to win playoff games,” Tallulah coach Bart Wood said.

The Trojans had to work hard for their latest first-round triumph. The fourth quarter of Friday’s game featured five lead changes, including three in the last 3 1/2 minutes.

Tallulah scored the game-winning touchdown on a 13-yard run by Landry Tweedle with 24 seconds remaining, but had to survive one last scare from PCA (6-5). The Eagles drove to the Tallulah 32-yard line in the waning seconds, and quarterback Jace Riggs was tackled inside the 5-yard line on a desperation scramble as time expired.

Wood said he was confident his defense would make a play to stop Riggs. He also noted that the Eagles would still have had to make a two-point conversion to send the game to overtime.

“It was a lot closer than I thought it was going to be, but when he took off running I was like, ‘We won,’” Wood said. “We had so many people back that I thought somebody would make the tackle. I didn’t expect him to make it all the way to the 1.”

On the other side of the field, PCA coach Blake Purvis was proud of his team’s effort all night. The Eagles rebounded well from a 60-38 loss to Tallulah in the regular season finale the week before, as well as an early 14-0 deficit in the playoff game. They had their first winning season since 2008 and made their first playoff appearance since 2014.

“That hurts. We’re right there on the cusp of it. But what these guys did to bounce back from last week, they responded better than any team I’ve ever been a part of,” Purvis said. “They never wavered. They did exactly what we asked them to do. They trusted the plan. When we were down 14-0 they never batted an eye. For that, I can’t be more proud of them. They played 40 minutes of football, and that’s all you can ask them to do.”

2
Southern Miss lost its sixth consecutive game on Saturday, 35-10 to Middle Tennessee, but did get to enjoy a brief moment of success.

Jake Lange’s 13-yard touchdown pass to Jason Brownlee with 7:47 left in the first quarter gave Southern Miss its first lead in six weeks. The Golden Eagles had been tied several times, but had not led in any of their previous four games and nearly half of another.

The last time Southern Miss had the lead was when it came out of haltime ahead 3-0 against Troy on Sept. 18. Troy scored a touchdown on the opening drive of the third quarter to take the lead for good in an eventual 21-9 victory, and Southern Miss went 17 quarters before it had the bigger number on the scoreboard.

Southern Miss’ lead Saturday was short-lived. Middle Tennessee scored three touchdowns in a 3 1/2-minute span of the first and second quarters to go ahead for good, 21-7.

Middle Tennessee scored three touchdowns on defense or special teams, which also continued a bad trend for Southern Miss. The Golden Eagles (1-7) have allowed a non-offensive touchdown in three consecutive games, and have given up a total of eight this season.

3
Mississippi State quarterback Will Rogers set a Southeastern Conference record for completion percentage in a single game with more than 30 attempts, as he connected on 36 of 39 passes (92 percent) in a 31-17 victory over Kentucky on Saturday.

The most surprising stat, however, came from the Bulldogs’ running backs.

Jo’quavious Marks carried the ball 20 times for 58 yards and a touchdown, and Dillon Johnson had 11 rushes for 41 yards and two TDs. Along with four runs by Rogers, the Bulldogs had 35 rushing attempts which are the most under pass-happy head coach Mike Leach.

It’s tied for the fourth-most attempts by any Leach-coached team. Mississippi State had surpassed 20 attempts in a game only twice this season. It had reached 30 once under Leach, in last season’s Armed Forces Bowl against Tulsa.

Mississippi State possessed the ball for a season-high 41 minutes and 10 seconds, which is also its high under Leach.

4
After a couple of modest games, Warren Central running back T.J. Thompson got back on track as the team’s primary runner and biggest offensive weapon.

Thompson carried the ball 23 times for 104 yards, and scored a career-high four touchdowns in a 42-13 rout of Petal. It was Thompson’s fourth 100-yard game of the season, and came after he had been limited to 22 carries for 93 yards in his two previous outings.

Thompson’s performance also continued a breakout season for the 5-foot-11, 200-pound senior. He now has 704 yards and six touchdowns on 130 carries, all roughly double his stats from 2020 in the same number of games. He also has two touchdown receptions.

“He’s been our bell cow all year. We have been very pleased with him,” Warren Central coach Josh Morgan said. “We know that’s what we want to do and that’s our strength. He was running hard and trying to find it, and I thought he did very well. Our offensive line handled their line up front and we were able to control the game on that end, for the most part.”

Warren Central (6-3, 3-3 MHSAA Region 3-6A) will finish the regular season Thursday night at 7 at Meridian. The Vikings can clinch a berth in the Class 6A playoffs with a victory.