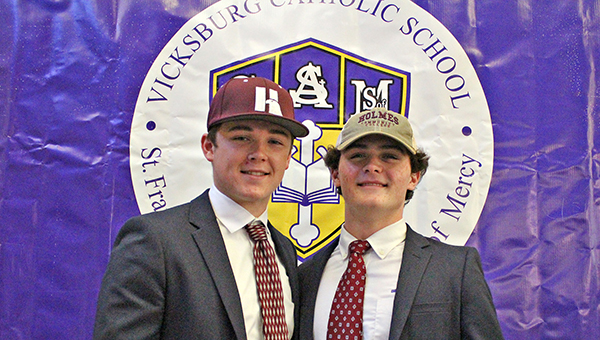 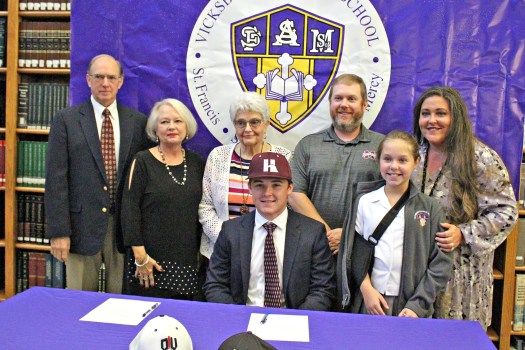 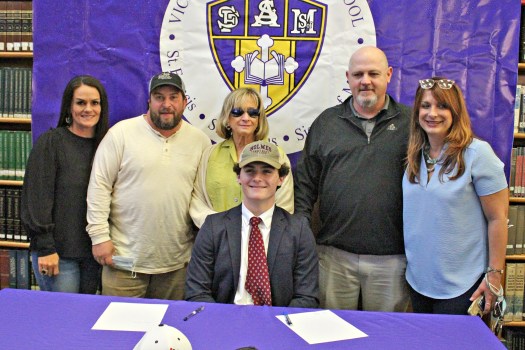 Tristan Wilbanks and Adam Francisco have played baseball together since they were 7 years old. It was only fitting, then, that they sat side by side as they celebrated their biggest highlight yet.

The St. Aloysius teammates both signed college scholarship offers Monday — Wilbanks with Hinds Community College and Francisco with Holmes Community College. The two seniors still have one season left with the Flashes before they go to the next level, but sharing a signing ceremony in St. Al’s library was a special moment for both.

“It’s a great feeling. I’m just happy I can do it with my best friend,” Francisco said. “I felt like some hard work paid off, but I wouldn’t be able to be here without my family and all my friends and coaches around me getting me to this point.”

Francisco, a utility player, batted .338 last season and led St. Al with 25 RBIs. He has played nearly every position on the field, including pitcher — he a 0.90 ERA in 23 1/3 innings in 2021 — and projects as a middle infielder for Holmes.

He said he picked Holmes over another offer from Hinds because of its head coach Scott DeLoach.

“Me and the coach had a conversation and just bonded on a different level. It felt like he wanted me to play there and I felt like I would respond to him better,” Francisco said.

Francisco’s path to Holmes has not been an easy one. He has battled several injuries during his high school career, including a lower leg injury suffered during this football season. He had surgery to repair damage about a month ago and was still wheeling around on a scooter during Monday’s signing ceremony.

He said he’s taken all of the injuries in stride.

“Stuff happens. God has a reason for everything. We just have to deal with it,” Francisco said. “It’s gave me some challenges. You have to have faith in what God has planned for you. Hopefully just make the best of what you’ve got and go as far as you can with it.”

Wilbanks, meanwhile, is healthy and happy to be headed to Hinds. He was St. Al’s top pitcher last season, with 66 strikeouts in 38 2/3 innings, and also played catcher. He batted .362, hit a team-high eight doubles and had 23 RBIs.

He said he picked Hinds over several other schools because of its long track record of success in developing players.

“It’s close and I didn’t want to be able to pass their exit and pass an outstanding program. That’s really important to me. I really like their coaching staff,” Wilbanks said. “They have a good record of getting people to the Division I level, or just moving on from there in general.”

Wilbanks said getting the chance to sign his scholarship offer was “a dream come true,” especially with his best friend at his side.

“I’ve always wanted to play at the college level since I was 2 years old. It’s surreal. It’s the beginning of a journey right now. It’s a relief. I feel really good and I’m ready to get started,” Wilbanks said. “I’ve played baseball with (Francisco) my whole life and it’s really special that I get to do this with him.”

Wilbanks and Francisco are the fifth and sixth St. Al players to move on to the college level in the past three years. Head coach Sid Naron said several more could be in the pipeline.

Naron said Hinds and Holmes are getting not only a pair of great athletes, but two quality leaders as well.

“What both of them bring to the table is that leadership. Since I’ve been here, we’ve never had more than one guy be a consistent leader and they have,” Naron said. “They have an innate ability to lead. Adam’s a little bit more quiet and Tristan is the more vocal one. They feed off each other. It’s definitely two leaders we’ll miss going into (2023).”