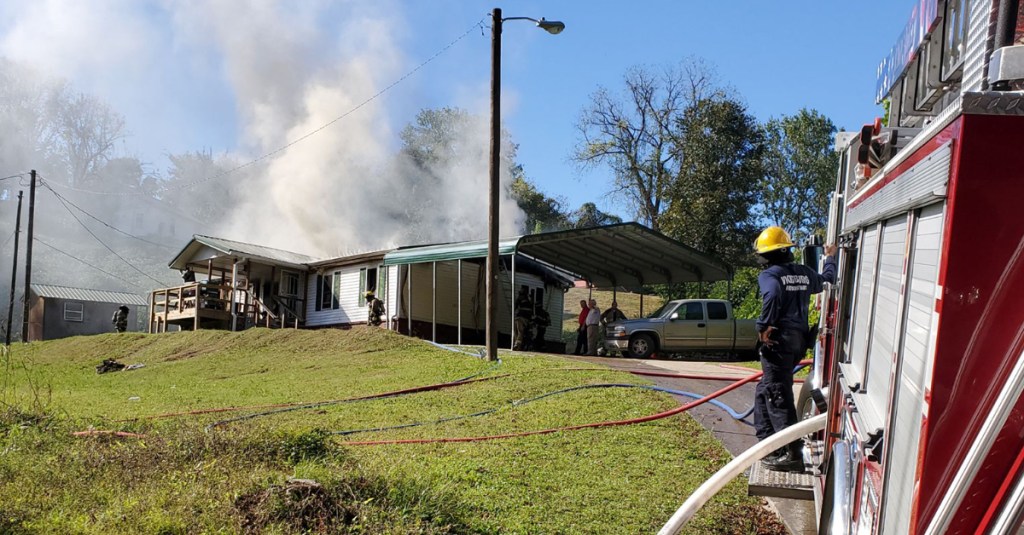 Vicksburg Fire Department Lt. Leroy Anderson works the pump controls on the fire department's Ladder 3 to get water to firefighters battling a blaze at 125 Debrah Drive. City and county firefighters had to shuttle water to fight the blaze. (Photo by John Surratt)

A lack of close available water forced firefighters to shuttle water to fight an early afternoon fire that heavily damaged a home at 125 Debrah Drive on Monday.

Deputy Vicksburg Fire Chief Trey Martin said firefighters received the call from 911 at 1:50 p.m. A Warren County sheriff’s deputy was the first to arrive at the scene and reported smoke showing.

The cause is undetermined. No one was at home at the time of the fire.

Because the area had a limited water supply, Vicksburg firefighters received help from the Culkin Fire Department, which brought a tanker and pumper to assist with water at the scene. The Culkin trucks shuttled water from a hydrant on Riley Road to the fire, where the county and city trucks were linked by a network of hoses to move water to Vicksburg’s Ladder 3 and to the firefighters.

Vicksburg Fire Chief Craig Danczyk said firefighters were aware of the water problem in the area, adding he called Warren County Fire Coordinator Jerry Briggs and asked for a tanker.

“We brought our own water to the scene,” Danczyk said. “Some of those areas, when you get on the edge of the city limits, it’s nice to have city and county there and while Vicksburg got there first, county fire sent a tanker and provided us with additional water.”

Danczyk said the city’s pumpers carry 750 gallons of water, while the county trucks carry more than 1,000 gallons and a tanker more than 2,000. Briggs said the Culkin pumper and the tanker responding to the fire were able to provide a total of 3,250 gallons of water for the fire.

“The fire trucks we sent, that was 2,000 gallons of water and what Jerry sent was in addition to,” Danczyk said.

Danczyk said Ladder 3, one of two ladder trucks with the fire department, carries 500 gallons of water because of the ladder.

“Certain areas, you don’t have an abundance of hydrants. That’s probably 1 to 2 percent (of the areas) on the map; this was just one of those areas where hydrants weren’t in abundance,” Danczyk said. “As the call came in and units were en route, Jerry Briggs and I talked and we got those additional resources out. The biggest (difficulty) was the lack of access and the lack of hydrants so we worked through that.”