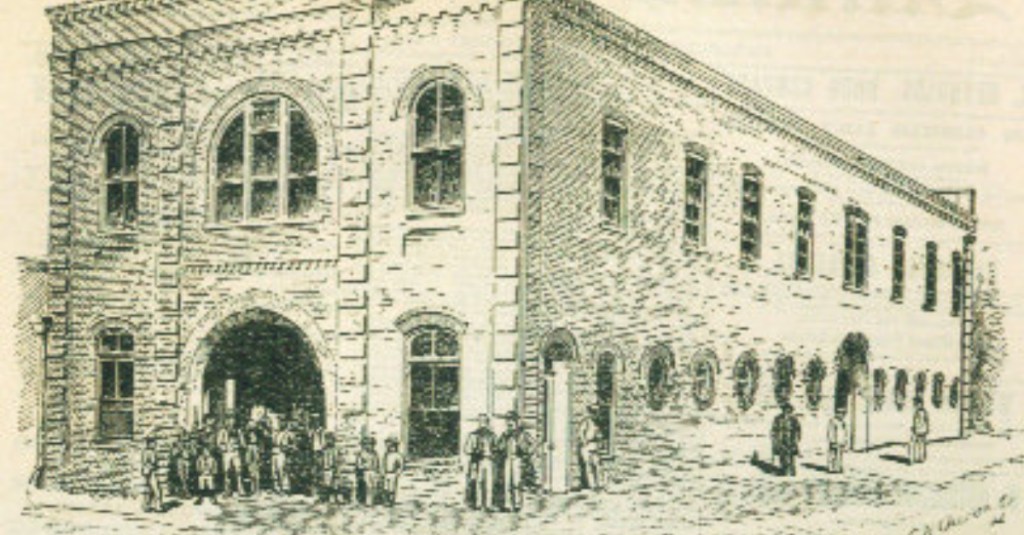 The Bazsinsky Stables, located on the corner of China and Walnut Streets, have followed Vicksburg travelers through the days of horses and horsepower. (Photo submitted)

On Aug. 7, 1889, brothers Nathan and Seymour (Bud) Bazsinsky purchased the “Gold Room” property on the northwest corner of China and Walnut Streets from Vincent Piazza.

They tore down the existing building and hired William Stanton to design a two-story brick livery stable. The building was to be 40 feet on China Street and 107 and one-half feet on along Walnut Street, and would “have all the modern improvements now attached to livery stables and the livery business.”

The architectural drawings were the first to be drawn by Stanton’s new draughtsman, F.C. Bartlett, who moved to Vicksburg from New Orleans in July. The building, with its “very handsomely designed and finely finished front,” was completed on Nov. 24, 1889. In December of the next year, the brothers demolished a frame building on Walnut Street behind their building in order to build an extensive addition to their stables. In January 1891, an archway was cut into the rear wall of the original building in order to connect the building with the addition in the rear.

In December 1893, Dr. C.W. Heitzman, a veterinarian, moved from Jackson to set up his office in the stables. By 1900, business was so good that the brothers operated a “branch” of stables on Washington Street across from the Piazza Hotel (1500 block). When the transportation industry moved from horses to horsepower, Bud converted the front part of his stables into a storage garage for automobiles and according to the Vicksburg Evening Post, by removing the stables in that section and installing a hard cinder floor, the area would accommodate about 30 cars.

The paper also reported that Bud would continue to use the north end of the premises for a stable and that he intended to install an automobile repair department with oils and gasoline for sale, but “for the present, he will only store the cars and clean and keep them in condition at all times.”

By 1921, the business was called 85 Tire and Vulcanizing Company and then by 1924, it was 85 Tire and Battery Co.  In 1925, there were still some stables in the rear addition, in the basement. In the 1930s, the front half of the building was removed and a large awning was constructed to cover gas pumps.

By the 1970s, the building was vacant, and in 1994 it was purchased by the Vicksburg Foundation for Historic Preservation and veterinarian Dr. Bill Lindley and was rehabbed into the Great Animal Adventures Children’s Museum.

Unfortunately, dramatic decreases in tourism required the museum to close in 2003 and the building was bought by the present owners who are now converting it into a residence.