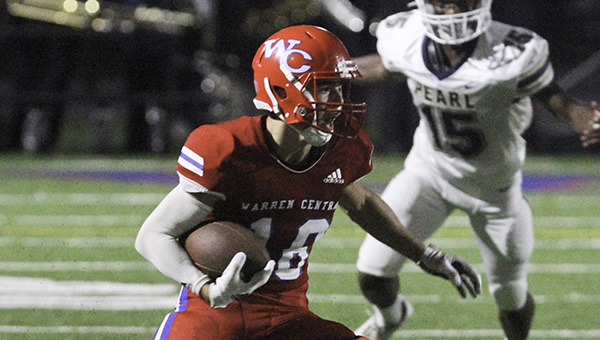 Warren Central wide receiver Bo Broome (18) makes a move after catching a pass earlier this season. Warren Central will finish its regular season Thursday at Meridian, and can earn a playoff berth with a win. (Paul Ingram/For The Vicksburg Post)

For its regular-season finale, Warren Central is channeling the famous motto of the NFL’s Oakland Raiders — just win, baby.

The winner of Thursday’s game between Warren Central and Meridian will earn a spot in the MHSAA Class 6A playoffs. The loser is out. It’s the simplest of scenarios for both teams, if not the easiest to succeed in.

“It’s the next week. We’ve been in a must-win situation for the last three games. It’s back to work for us. We’ve got to win,” WC coach Josh Morgan said. “Meridian is a tough place to play, a tough team, but we’re excited about playing meaningful football and having an opportunity to control our destiny. We’ve got to handle business.”

Northwest Rankin, Petal and Terry have all been eliminated from playoff contention.

The third-place team from Region 3-6A will travel to play D’Iberville (9-1) in the first round of the playoffs. The fourth-place team plays at Ocean Springs (9-0).

That Warren Central is in a position to reach the postseason for the 10th consecutive season seems remarkable considering where it was a few weeks ago.

The Vikings lost their first three region games and allowed 105 points in that stretch. They’ve won three in a row since then, including a pair of shutouts, and outscored their opponents 76-13.

Ironically, Morgan said the Vikings’ winning streak might not have come about had it not been for the losing streak that preceded it. The three-game skid sparked changes in the lineup and scheme that worked to make the team better, he said.

“It seems like it was almost an eternity now, when you look back three weeks ago. But I’m not so sure if we didn’t make those adjustments and correct those mistakes that we would be sitting in this position,” Morgan said. “We played the hand that we were dealt. A lot of that was on us. We put ourselves in that situation, but we’ve also done a good job responding. Now we have to finish and continue to stay in this thing.”

Meridian won five of its first six games, but has lost three of the last four — including a 29-28 defeat at the hands of last-place Terry last week. Meridian’s last two games have been decided by a total of four points, and two others earlier in the season were decided by a touchdown or less.

“They’re a very athletic football team. They’re dangerous, and they’re explosive on offense. We have to be ready for their best. We can’t let our mind wander anywhere else,” Morgan said. “They’re going to be playing for the exact same thing that we’re playing for. That loss (to Terry) didn’t affect them at all. We have to be ready to play our best vs. Meridian’s best, and that’s what it’s going to come down to, and where we have to keep our focus.”

Fortunately, the Vikings do seem to be playing their best football at exactly the right time. The 31 and 42 points they scored in wins over Terry and Petal were the most they’ve put up in any game so far. The defense has also found its groove again, following its baffling three-game slump.

“It’s one of those things where you talk about peaking at the right time, which I think we’re doing,” Morgan said. “But you’re also building momentum week in and week out. That’s probably one of the most powerful things in all of sports, is momentum. So we have that going for us. We’ve got a confident ballclub, a lot of momentum, we’ve been through a lot, and it’s been very pleasing to see our guys grow up in front of us and really doing well.”