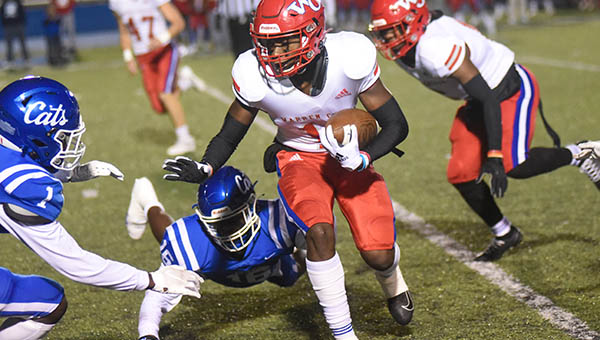 Warren Central linebacker Jashun Simon runs with the football after making an interception Thursday against Meridian. Simon had two interceptions to help the Vikings win 31-21. (Thomas Howard / The Meridian Star)

The final step in Warren Central’s journey to the playoffs was a lot like the rest of it — a little shaky at times, but with a strong finishing kick and no small amount of resilience that carried them to the end.

“Being in the playoffs 10 consecutive years is a pretty amazing feat,” Warren Central coach Josh Morgan said. “They wanted to be a part of that and they weren’t going to be denied. They’ve done a really good job and I’m very proud of them.”

The Vikings (7-3, 4-3 MHSAA Region 3-6A) qualified for the playoffs by winning their last four regular-season games after losing their first three in region play. The reward is a trip to D’Iberville (10-1) next week for the first round of the Class 6A playoffs.

The Vikings earned the No. 3 seed from Region 3-6A after Pearl was blown out 38-7 by Brandon on Thursday night. Pearl got the No. 4 seed and will travel to face Region 4-6A champion Ocean Springs (10-0).

Meridian (5-6, 2-5) was eliminated from playoff contention with its loss. Brandon won the Region 3-6A championship and Oak Grove earned the No. 2 seed.

“We’re excited. It means a lot to these guys. It means a lot to these seniors. Of course, three is better than four, so our best-case scenario happened for us. It’s the way we envisioned all this happening,” Morgan said. “Our guys have done a good job staying one week at a time and we’ll continue staying with that approach. We’re thankful. I also think it’s well-deserved and well-earned. We’re going to do our very best to make the most of it and stay in this thing.”

Warren Central scored more than 30 points for the third game in a row, and had a chance for more. Two trips inside the red zone in the first quarter resulted in a turnover on downs on a fake field goal and an interception in the end zone.

The Vikings finally got on the board twice in the second quarter, on a 26-yard pass from Wright to Lynch and a 6-yard run by Mark Gray. But they also gave up a touchdown drive in the last two minutes, capped by a 14-yard run by Howard Atterberry, that allowed Meridian to go into halftime down only 14-7.

“I thought we had control of the game for the most part, but Meridian just wouldn’t go away,” Morgan said. “I thought we controlled the game really well with our ground game. That’s the best way to control it with a lead, and we never gave up that lead.”

The last 15 minutes of the game were filled with highlights from both teams, who each had their seasons on the line.

Lynch bobbled a pass from Wright before gaining control and going for a 76-yard touchdown with 2:45 left in the third quarter. Then the teams traded four scores in the last six minutes of the game, with the Vikings ultimately coming out on top.

Jonathon Vaughn scored on a 1-yard run and a 54-yard pass for Meridian. Brandon Gilliam kicked a 40-yard field goal for Warren Central and T.J. Thompson broke off a 40-yard run with 2:16 remaining to put the Vikings ahead 31-21.

Simon’s second interception of the game with 1:56 to go finally put it away for Warren Central.

Thompson finished with more than 100 rushing yards and Lynch had a 100-yard receiving game for Warren Central.

“This was the equivalent of a playoff game. Both teams were playing for the same thing. Meridian fought really hard,” Morgan said. “We had a two-score lead several times in the game and they fought right back into it. I thought both teams did a really good job of responding back-and-forth.”