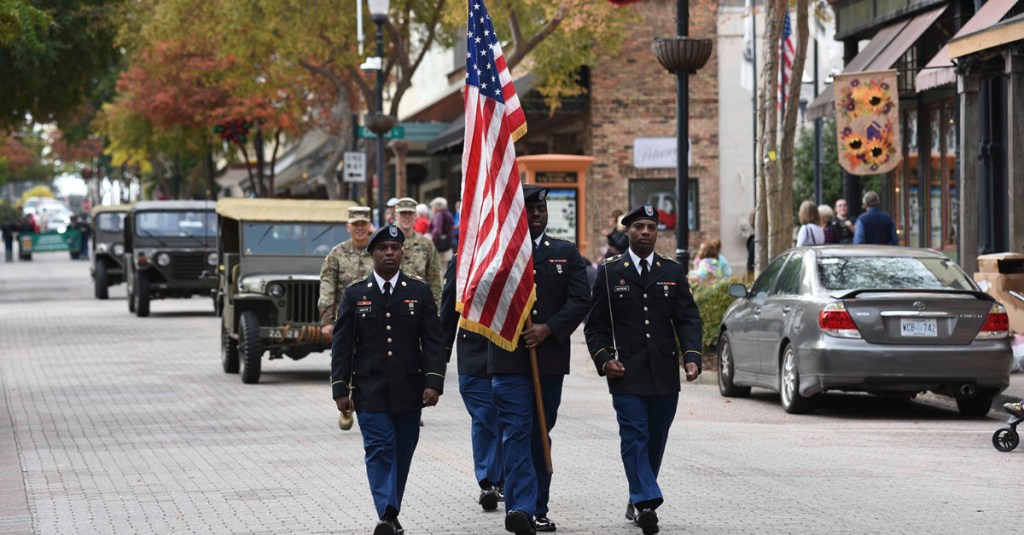 An honor guard kicks off the 2019 Veterans Day parade in Vicksburg. The parade and Rose Garden ceremony return Thursday after a one-year absence because of COVID-19. File photo

After a one-year absence, Vicksburg’s traditional Veterans Day observance is coming back and going live.

“I feel good about it (returning),” said Willie Glasper, one of the event’s organizers. It’s coming back to normal. A lot of our veterans were inquiring about the parade and wanted to get back to the full activities. I spoke with the mayor and the (Veterans Day) committee and the (American Legion) commanders, and they’re ready to go.”

Program organizers canceled the parade in 2020 out of concern for COVID-19, and the Rose Garden ceremonies were presented in a virtual format over the Internet.

And although the area has seen a drop in COVID-19 cases, Glasper said participants and spectators for the parade, the Rose Garden ceremony and the lunch after the ceremony at the American Legion Allein Post 3 will be encouraged to wear face masks if they wish.

The parade begins at 9:30 a.m. with groups lining up at Belmont Street and moving north on Washington Street to Jackson Street. The Rose Garden ceremony begins at 11 a.m. on Monroe Street and includes a wreath-laying and the playing of “Taps.”

“We are trying to have a 21-gun salute,” Glasper said.

The featured speaker for the Rose Garden ceremony is Carl Baker, a life member of The American Legion and an executive committee member for American Legion District VI, Department of Mississippi.

He has also served as the commander and vice commander for District VI for two years each and has held many offices at American Legion Allein Post 3 in Vicksburg, including commander and finance officer. When Congress allowed eligibility for membership to change, he became the first male Auxiliary member with the Allein Unit 3 through the sponsorship of his wife.

Baker enlisted in the Army in 1970 as a military policeman and retired from the Army in 1992 after serving at several posts, including operations non-commissioned officer in charge and head of the VII Corps Commanding General’s Protective Service Detail in Stuttgart, Germany.

Glasper said program organizers are glad to have the parade and ceremony return.

“The ones (veterans) I’ve spoken to are excited about it; I’m excited,” he said. “I’m glad we’re able to do this for our veterans because they’ve done so much for our country’s freedom that we take for granted and many of them did not come back. I feel very deeply that if we don’t do something for them, people will forget about them.”