Mean Green is not kind to Southern Miss 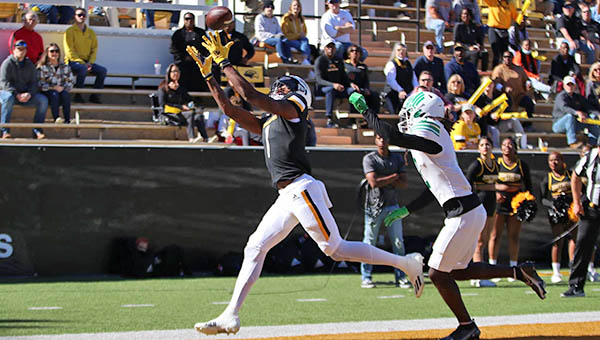 HATTIESBURG — A fast start put Southern Miss in the lead Saturday. A solid second quarter helped them hold it until halftime.

And then an all-too-familiar script played out in the second half that squashed their hopes of adding a little light to a dark and dismal season.

North Texas scored 38 unanswered points ­— including 31 in the second half ­— rushed for more than 300 yards and scored two defensive touchdowns to beat Southern Miss 38-14.

Southern Miss (1-8, 0-5 Conference USA) lost its seventh game in a row. It has not scored more than 19 points against an FBS opponent this season.

“Another tough defeat, obviously. We’re just not a very good football team. There’s not a lot you can say, you guys can see it,” Southern Miss coach Will Hall said. “We’re really thin right now. We’re playing in the 60s in scholarships. It’s not an excuse, it’s just a fact. We’re one of the youngest teams in America. We’ve talked about that. We’ve got to keep getting better. I saw some young guys continuing to improve. And we’ve got to keep recruiting and it’s really hard right now. We’ve got three more games. It’s probably not going to get any easier.”

Southern Miss jumped out to a 14-0 lead in the first quarter Saturday. The Golden Eagles scored on a 17-yard pass from freshman Jake Lange to Jason Brownlee on their first possession, and Jay Stanley returned an interception 55 yards for another touchdown on North Texas’ next possession. They also had a goal line stand at the end of the second quarter to take a 14-7 lead into halftime.

Ragsdale finished with 112 yards on 15 carries. Isaiah Johnson led all rushers with 119 yards on 17 carries and a TD for North Texas, which had 321 rushing yards as a team.

Southern Miss had 229 total yards. Lange was 17-of-25 for 116 yards and was sacked three times. Frank Gore Jr. ran for 82 yards on 12 carries. Brownlee caught four passes for 53 yards and a TD, and former Warren Central star Demarcus Jones had six receptions for 49 yards.

“It’s very frustrating because our defense played great and they got a lot of stops and we just couldn’t score and move the ball like we wanted to,” Gore said of the team’s offensive struggles. “Just a lot of missed throws, missed blocks, just the little things that we usually hit and it’s frustrating.”