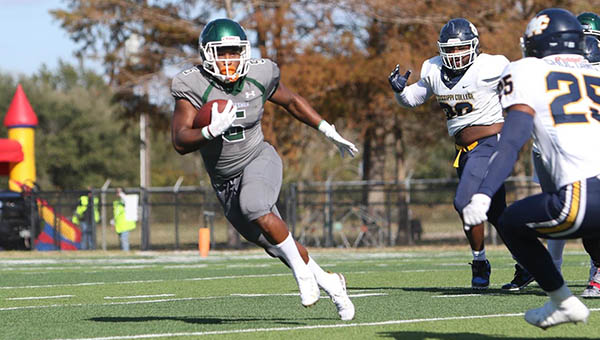 DAYTONA BEACH, Fla. — With one stunning upset, Alcorn State’s reign atop the Southwestern Athletic Conference might have come to an end.

Bethune-Cookman scored two touchdowns in a five-minute span in the second half, and the Wildcats won their first game of the season by beating Alcorn State 35-31 on Saturday.

Stadford Anderson ran for 115 yards and three scores for the Braves, including a 19-yard run with 6:34 left in the third quarter that gave them a 31-21 lead.

Bethune-Cookman (1-8, 1-5 Southwestern Athletic Conference) answered with a 33-yard touchdown pass to Kemari Averett late in the third quarter, however, and then took the lead on a 3-yard run by LaDerrien Wilson with 12:27 left in the game.

The Wildcats looked to add to the lead but Que’shaun Byrd was stripped of the ball deep in Alcorn State territory and the Braves recovered. Bethune-Cookman’s defense stiffened and held Alcorn State (5-4, 4-2) to 12 yards in seven plays and forced a punt with 5:17 left. The Wildcats nursed the clock to end it.

Alcorn quarterback Felix Harper was 24-of-33 for 300 yards and one touchdown.

Alcorn (5-4, 4-2) fell two games behind Prairie View A&M in the SWAC’s West Division with two league games remaining. The Braves need to beat Prairie View at home next week, as well as East Division leader Jackson State in the regular-season finale on Nov. 20 — and have Prairie View lose another game ­— to earn its seventh trip to the SWAC championship game in eight seasons.

Jacorey Howard carried just two times for three yards for Texas Southern, but each run ended in the end zone. His 2-yard run with 5:44 left in the third quarter pulled his team even at 21-21.

Texas Southern managed just 79 yards passing but LaDarius Owens carried 23 times for 198 yards and the Tigers finished with 259 yards on the ground.

Hilaire, a wide receiver, opened the scoring with a 48-yard pass to Dee Anderson. Glass the threw three touchdown passes in the second quarter for a 28-7 halftime lead for the Bulldogs. Glass hit Hilaire for a short score in the third quarter and Gary Quarles added a 1-yard run in the fourth.

The Delta Devils scored on a 9-yard run by Jalani Eason in the first quarter and a Conor Regan’s 7-yard pass to Jacory Rankin in the fourth.

MVSU quarterbacks Eason and Regan combined to go 22-of-36 passing for 217 yards.

Delta State 24, Mississippi College 21, OT
Deion Dampier scored on a 1-yard run with less than two minutes left in regulation, and Connor Mantelli kicked the tying PAT and then the game-winning field goal in overtime to give Delta State (5-5, 3-4 Gulf South Conference) a win over in-state rival Mississippi College (3-6, 2-5).

Dampier also had a 51-yard touchdown run in the third quarter, and his late score tied the game at 21. Dampier finished with 96 yards on 14 carries.

Cole Fagan rushed for 131 yards for Mississippi College, with nearly half of it coming on a 64-yard touchdown early in the third quarter. The Choctaws got another long touchdown on a 75-yard pass from DeAnte Smith-Moore to Sam Wilder in the second quarter.

Mississippi College had the ball first in overtime, but fumbled on the opening possession. Delta State recovered and won it with Mantelli’s 28-yard field goal.