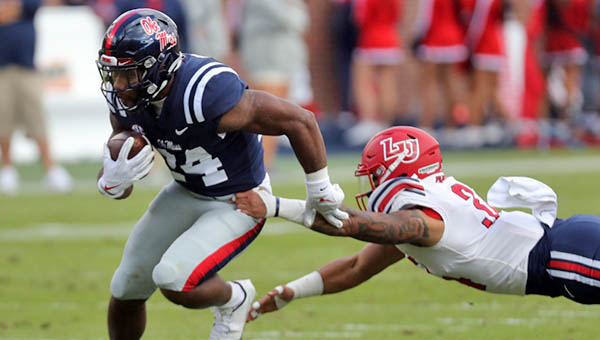 OXFORD (AP) — The return of Hugh Freeze to Ole Miss was met with little fanfare and a matter-of-fact victory by the Rebels.

Matt Corral threw for 324 yards and a touchdown to lead No. 15 Ole Miss past Liberty and the former Rebels coach 27-14 on Saturday.

Corral continued to build a Heisman Trophy resume, completing 20 of 27 passes, including six completions of 20-plus yards.

“Matt (Corral) is gritty and tough and it was obvious today we didn’t try to move him very much,” Ole Miss coach Lane Kiffin said.

The Rebels (7-2) raced to a 24-0 halftime lead, highlighted by a 70-yard touchdown run by Jerrion Ealy on the game’s second play.

Freeze coached the Rebels from 2012-16 to considerable success, including two victories against Alabama, before being forced to resign amid scandal. It was discovered during a lawsuit related to an NCAA investigation that Freeze made phone calls to a female escort service while on work-related travel.

Ole Miss was also hit with NCAA sanctions for recruiting and academic violations that happened under Freeze.

Freeze downplayed his return leading up to the game and the less-than-capacity crowd didn’t have much reaction to his return to Oxford. Kiffin avoided controversy throughout the week, too, maintaining his admiration and personal friendship with Freeze.

“I loved playing here today. It was fun,” Freeze said. “Wish we’d have gotten one more and made it interesting at the end.

Dannis Jackson had six receptions for a game-high 126 yards, including a 40-yard touchdown. John Rhys Plumlee added seven receptions for 110 yards for an Ole Miss receiver corps that has been banged up.

“We needed Dannis and Plumlee to step today and they were huge,” Kiffin said.

Ealy rushed for 115 yards on 10 carries and added another 4-yard touchdown run as the Rebels built the insurmountable first half advantage.

Liberty (7-3) was led by Malik Willis, who ran for a 3-yard touchdown and finished 16 of 25 for 173 yards, but threw three interceptions.

The Flames had 457 total yards, primarily in the second half. Shedro Louis had seven rushes for 101 yards, including a 28-yard touchdown.

“We allowed them to have too many big plays that created scoring opportunities and that was probably the difference in the first half,” Freeze said. “The second half we were better at that. If we had done that in the first half, it might have been a different game. But, if, if, if.”

“The sacks are good, but we won and that’s all that matters,” Williams said. “It’s ‘So what? Now what?’ around here and now it’s a lot of work to do before Texas A&M.”