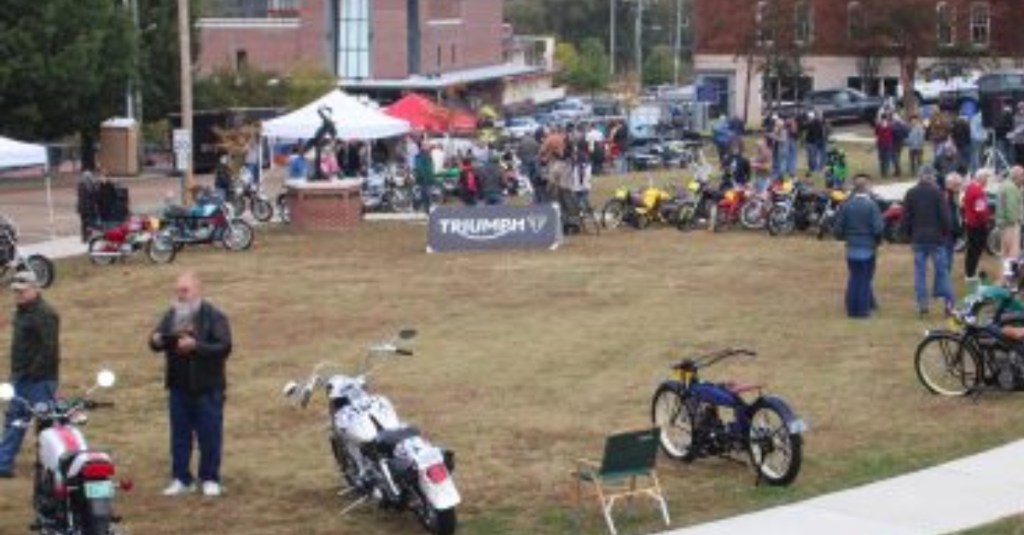 Vintage motorcycle enthusiasts look over the collection of motorcycles parked at Washington Street Park Saturday morning. About 100 bikes were on display at the show, which featured vintage bikes from 1921 to 1990. (Photo by John Surratt)

It wasn’t Sturgis, S.D. or Daytona Beach, Fla., but Saturday’s Vintage Motorcycle Show drew a large crowd to Washington Street Park to look at, drool over and talk with the owners of classic motorcycles from 1921 to 1990.

“This is the fourth year,” organizer Roger Harris of Vicksburg said above the roar of people revving engines. “We’ll have 100 bikes here today.”

A vintage motorcycle enthusiast and a collector and restorer of bikes, Harris said he organized the show because there was no place locally for collectors to show their classic bikes.

“This show was started as a way to get those vintage bikes together within a couple of hundred miles from Vicksburg,” he said.

Harris said this year’s show has attracted collectors from Denver, Colo., Columbus, Ga., Illinois and South Louisiana; “all of our neighboring states.

“We’ve got a really good turnout today, some really quality bikes and expensive vintage motorcycles and we’ve got some that your average collector or average person that rode on the 60s and 70s would have out here,” he said. “We’ve got all kinds here.”

One of those classic bikes was a British-built 1952 Vincent Rapide Touring Model Series C motorcycle owned by Gene Brown of Denver.

Harris has called the bike “really almost the Holy Grail of motorcycle collectors.”

“We found this one about five years ago under a porch in Atlanta, Ga.,” Brown said. “It had been there for 40 years.”

In the past five years, he said, the bike has been shown at vintage motorcycle shows across the country, adding the bike has received “Best of Show” and “Best in Class” awards.

He said he learned about the Vicksburg show in “The Antique Motorcycle” magazine.

Brown called the park “a sweet venue” for a show.

“It’s small but there are a lot of bikes, which is unusual,” he said. “We usually don’t see this many bikes. We’ve gone to shows where there are only 10 bikes.”

Another unique motorcycle was a customized Honda Goldwing tricycle owned by Rex Robertson.

“It’s been modified; there’s a lot of custom parts,” Robertson said. “One interesting feature of the trike was its gearshift and clutch. It has a lot of parts that aren’t supposed to work like this.”

Robertson said the park made a good venue for the show.

“I like this,” he said. “I think it should remain a park. It’s great for events like this and it’s a good location to watch the (July 4) fireworks. This park is more of an upgrade they need something like this to bring people downtown and help the stores.”

Harris said Washington Street Park has been a good site for the show.

“The park is an excellent venue for things like this,” he said. “I’m glad it’s available.  I think it’s an asset for the city to have this park to have such things; we’ve been to other events at this park. I hope the city keeps it a long time and allows us to do things like this and supports us when we do.”