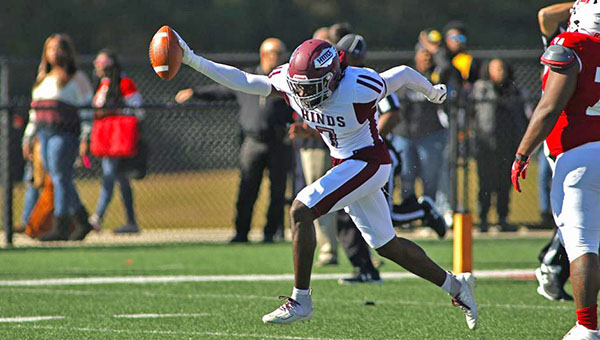 Hinds Community College defensive back Ta'Darrius Williams (7) celebrates after recovering a fumble in an MACCC playoff game against East Mississippi on Saturday. Hinds won in overtime, 42-41, to advance to the state championship game for the first time since 2004. (Matthew Alford/Hinds Community College)

Hinds advanced to its first state championship game since 2004, and will face defending champion Northwest Mississippi on Nov. 13 in Senatobia.

Northwest Mississippi also used a late defensive stop to beat Jones College 26-20 in the other semifinal.

“You can’t win if you don’t believe in each other. It was a gut check, and I’m so proud of our guys. We need some support in Senatobia for the championship game next week,” Hinds head coach Larry Williams said.
Hinds (8-2) was making its first playoff appearance since 2017, and handed East Mississippi (9-1) its first loss of the season and only its third loss at home in 54 games since 2011.

Hinds led 14-3 early, but EMCC quickly erased that deficit and the teams traded touchdowns the rest of the afternoon. The Lions tied the game at 35 on a 14-yard touchdown pass from Jamari Jones to Jontarius Henderson with 50 seconds left in regulation.

In overtime, Hinds running back Jeffrey Pittman scored on a 4-yard run and Ben Duncan added the PAT. Jones than scored on an 8-yard run, but EMCC went for two and the win. Jones’ pass for Henderson was tipped and intercepted by Reginald Barnes Jr. to end the game.

Quaterius Hawkins threw a 50-yard touchdown pass to Qua Sanders to pull Jones to within 26-20 with 8:21 remaining in the fourth quarter. It then drove inside the Northwest 25-yard line in the final two minutes, but Hawkins tried to run for a first down on fourth-and-11 and was stopped two yards short.

Hawkins was 13-of-27 passing for 244 yards, two touchdowns and two interceptions. Michael Hiers threw a touchdown pass for Northwest, and also ran for 37 yards and a TD. Jaquerrious Williams rushed for 105 yards and a touchdown.

2
Warren Central’s special teams played a key role in a win over Meridian on Thursday that secured a berth in the MHSAA Class 6A playoffs.

The Vikings blocked two kicks — one punt and one field goal — and Brandon Gilliam drilled a clutch 40-yard field goal late in the fourth quarter of a 31-21 victory.

The blocked punt in the first quarter gave Warren Central the ball inside the 20-yard line, but it was not able to score off of it. The blocked field goal in the third quarter kept the score at 14-7, and was immediately followed by a 76-yard touchdown pass from Jack Wright to Preston Lynch.

Warren Central has blocked a half-dozen kicks this season.

Gilliam, meanwhile, made a field goal for the third time in four games and has made 14 cosecutive PATs in the same span. The field goal put the Vikings ahead 24-14 with four minutes left.

“Brandon Gilliam did another outstanding job for us. That field goal gave us another two-score lead, and kicking the ball in the end zone he was a big weapon tonight,” Morgan said. “Meridian had one of the fastest kids in the state and (Gilliam) took him out of the game with his kickoffs. He was a big weapon. He’s getting to be that weapon we anticipated and expecting him to be.”

3
The best offense continued to be a good — or at least opportunistic — defense when Southern Miss is on the field.

The Golden Eagles allowed two defensive touchdowns in a 38-14 loss to North Texas, on a pair of fumble returns in the second half. That brought to 10 the number of defensive or special teams touchdowns Southern Miss has allowed in nine games this season.

Six different opponents have scored a defensive or special teams touchdown against Southern Miss, and three — Alabama, Middle Tennessee and North Texas — have scored more than one.

Southern Miss (1-8) also scored a defensive touchdown against North Texas, on a 55-yard interception return by Jay Stanley. It was their third this season, and marked the eighth time in nine games that either USM or its opponent has scored on defense or special teams.

Southern Miss’ next opponent, undefeated UTSA (9-0), ranks third in the Football Bowl Subdivision with five defensive touchdowns this season. Only Nevada and Ohio State, who have six each, have scored more.

4
A frustrated Mike Leach put out a call for kickers after the ones on his Mississippi State roster missed three field goals in a 31-28 loss to Arkansas on Saturday.

Brandon Ruiz missed from 23 and 46 yards, and then Nolan McCord shanked a 40-yard attempt that would have tied the game as time expired.

The two kickers are just 9-for-17 on field goal attempts this season, and 1-for-7 on field goals of 40 yards or longer. This was the second time that the Bulldogs have missed a field goal in a game they lost by three points. McCord missed a 33-yarder in a 28-25 loss to LSU in September.

“I think that there’s an open tryout, and you can announce this, there’s an open tryout on our campus for kickers,” Leach said after Saturday’s loss. “Anybody that wants to kick or walk on and kick for Mississippi State, we will hold a tryout any time you can get over there to our building, provided you’re cleared by the NCAA.”