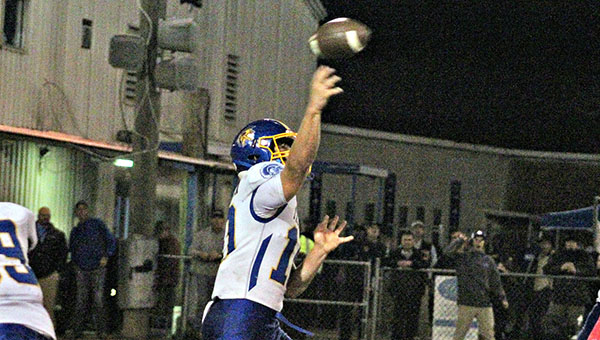 Tallulah Academy quarterback Dee Morgan throws a pass during a playoff game against Porter's Chapel Academy. Tallulah finished its season with a 44-40 loss to Manchester Academy in the second round of the MAIS Class 2A playoffs last week. (Ernest Bowker/The Vicksburg Post)

For only the third time in eight years, Tallulah Academy’s football season did not end with someone lifting a championship trophy. Coach Bart Wood, though, bristled when it was suggested that there was anything disappointing about that.

The Trojans bowed out of the MAIS Class 2A playoffs with a 44-40 loss to top-seeded Manchester Academy on Friday night. It capped a season in which they fought through a number of injuries to an already retooled roster, yet still finished 7-5 and were within a play of reaching the semifinals.

Tallulah has won three state championships and played for two others since joining the MAIS’ 8-Man division in 2014.

“It’s a character-builder. The boys kept fighting. For us to have a chance to win that game at the end with all the stuff that happened to us, you have to give them credit,” Wood said. “It’s probably the proudest I’ve been of any team I’ve ever coached. We went through so much adversity and people kept stepping up.”

Injuries plagued Tallulah during a 3-4 start that included a forfeit loss because of a COVID-19 outbreak at the school. The Trojans rallied to win four consecutive games, including a first-round playoff victory over Porter’s Chapel Academy, before another round of injuries hit them leading into the second-round matchup with Manchester.

Linebacker Jud Dennis and running back Wyatt Bedgood both suffered concussions against Porter’s Chapel and did not play against Manchester. Leading rusher Paul Michael Machen did play after tearing a calf muscle against PCA, but was obviously limited.

Another player, defensive tackle Landon Wells, suffered a neck stinger during the game and had to be taken from the field in an ambulance. Wood said on Tuesday that Wells was doing well and is expected to make a full recovery.

The various injuries not only robbed the Trojans of key players, but forced others to play positions they were not used to. Wood said he had two players in the lineup who had not played defense all season.

“When you have key players hurt, it’s hard. Somebody was always playing a different position than they normally played. Crazy, crazy year,” Wood said.

Manchester Academy (10-1) jumped out to a 24-point lead in the first half, but Tallulah fought its way back into the game and had a chance to pull a stunning upset at the end.

Trailing 44-40, the Trojans drove inside Manchester’s 20-yard line with less than a minute to play. Several passes were broken up by Manchester’s defense, however, and the Mavericks survived and advanced to the semifinals to face Claiborne Academy this week.

Quarterback Dee Morgan threw three touchdown passes and ran for two more for Tallulah, and Machen had 128 total yards and two touchdowns. Arnett Sevier caught a 54-yard touchdown pass and also had an interception on defense.

“We had an opportunity,” Wood said. “We had no timeouts so we threw it four times and didn’t complete any of them. One of them, Paul Michael was open five yards behind their guy and their guy tipped it. You can’t plan for that.”

North Sunflower Academy and Prairie View Academy will play in the other semifinal, with the winners meeting Nov. 19 at Jackson Academy in the Class 2A championship game.

Manchester has won the last two MAIS Class 2A championships, and its only losses as an 8-man football program have come against Tallulah.

Tallulah beat Manchester in the 2018 8-Man championship game, before the division was split into two classifications, and in the 2021 regular season. They’ll meet again in Week 4 of the 2022 season, and Wood is already looking forward to the Trojans regaining their place atop the 8-Man mountaintop.

Tallulah only has eight seniors on the 26-man varsity roster, and will lose five starters. Among those returning are the two-year starting quarterback Morgan, as well as Bedgood and another running back, Graham Tweedle. Tweedle had the game-winning touchdown in the final minute of the playoff win over Porter’s Chapel.

So while the 2021 season was a difficult one to endure and ended sooner than they’d have liked, Wood was confident his team will not take any steps backward.

“I think we’re the team to beat. We hardly have any seniors. Our core this year was juniors,” Wood said. “It’s supposed to be our year. You watch classes come up and say this is going to be their year. You’re supposed to win when you have 10 seniors in 8-man football. It’s a big group of boys and they all can play.”