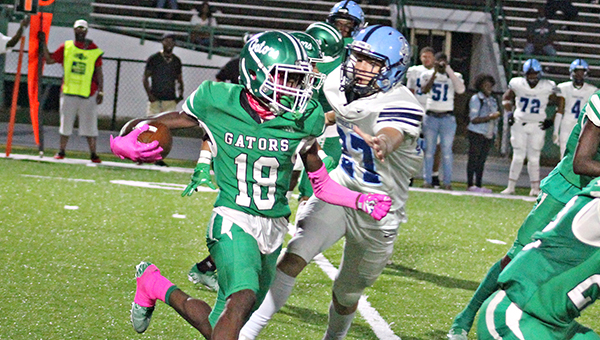 Vicksburg's Tyler Henderson (18) returns a kickoff against Ridgeland. The Gators will host Cleveland Central Friday at 7 p.m. in the first round of the MHSAA Class 5A playoffs. (Ernest Bowker/The Vicksburg Post)

A popular coaching cliché is that the postseason is a new season, where everyone’s record resets to 0-0 and nothing that came before matters.

The Gators (6-4) finished the regular season with back-to-back losses. Moving on from that to their playoff opener Friday against Cleveland Central (6-4) is just the thing they needed to wipe the bad taste out of their mouths and get back to the success they’ve enjoyed for much of the year.

“Just being able to come back out and get the kids back out on Monday, get in the weight room and watch film, it’s a breath of fresh air to be able to get started and focus on someone else,” Vicksburg coach Todd McDaniel said. “I’m really happy with our season. We’ve shown we can compete with some of the best teams in the state and in 5A football. Here’s another opportunity to present ourselves and put our program out there and let them know we’re not the same old Gators.”

These are definitely a different breed of Gators than many of their reent predecessors. Vicksburg finished second in Region 2-5A and will host a playoff game for the first time since 2008.

The Gators have done it with a mix of stifling defense — they’ve posted four shutouts and have not allowed more than 20 points since the season opener — and highly efficient offense. The Wing-T attack has averaged well over 200 rushing yards and 29.4 points per game, with five different running backs each taking their turn in the spotlight from week to week.

The team’s Achilles Heel, however, has been its tendency to self destruct in crucial moments. Penalties have taken about two dozen touchdowns off the board over the course of the season, including three in a 14-12 loss to Holmes County Central last week.

“It’s more than hurting us. It’s taking games away. We could easily be 8-2. There’s only one team that I feel like really beat us, and that was Germantown (a 34-14 loss in the season opener),” McDaniel said.

Cleveland Central won three of its last four games to finish third in Region 1-5A, and its only losses in the league were to top-five opponents West Point and Lafayette. Four of their five region wins were by 11 points or more.

Like Vicksburg, Cleveland Central relies on its running game to score points. Jamarion White has 1,273 yards and 11 touchdowns, and Myles Griffin has 573 yards and 17 TDs.

“They’re huge. They seem to be a well-organized team. They have an identity and know what they want to do. We’re very similar in a lot of cases,” McDaniel said. “It’s going to be a quick and fast football game Friday. It’s not going to last three hours, I guarantee you that — unless it’s a lot of penalties.”

Besides the obvious goal of keeping the season alive, Friday’s game offers the Gators a chance to check another milestone off the list in a season full of them.

Vicksburg has only reached the second round of the playoffs once since reaching the Class 5A semifinals in 2001, and three times in 17 appearances since 1992. It has not won a playoff game at all since 2008.

The winner advances to play Ridgeland or West Point next week.

“We have the opportunity to go out and show the state that we’re going to be here for a while,” McDaniel said.

Playing at home, McDaniel added, is also nice. The Gators played four of their first five games at home, but have only been in The Swamp once since September. Both of their late-season losses were on the road.

“This is the second home game in six weeks. It’s very big for us to play at home, be in front of our crowd and on our field, and represent Vicksburg the way it’s supposed to be represented,” McDaniel said. “It feels good to be able to be at home. The road hasn’t been so friendly to us.”