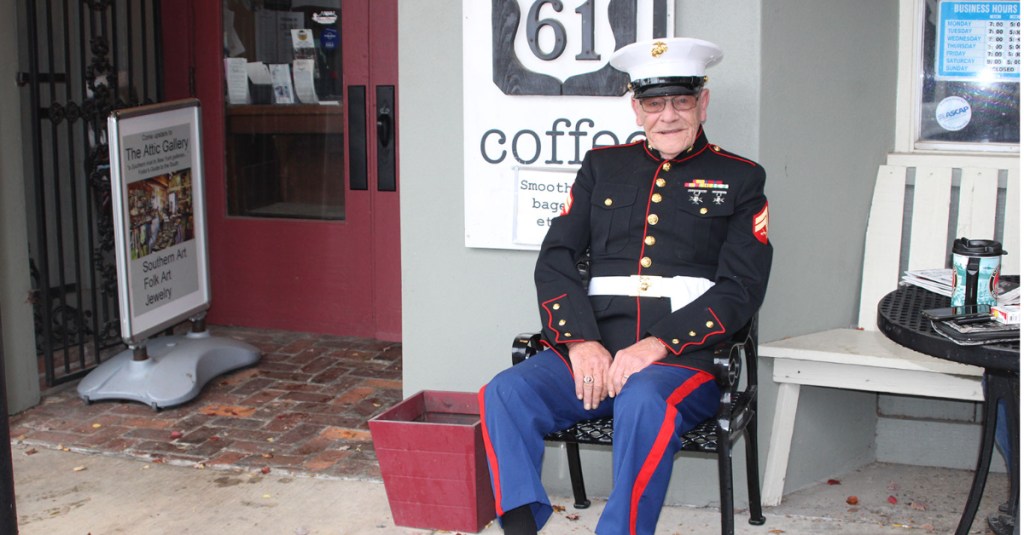 Monday through Friday mornings, you can usually find Tommy Oakes sitting at a table outside Highway 61 Coffee House, clad in a camouflaged fatigue jacket and cap drinking coffee, talking with friends and watching the early morning activity on Washington Street.

Thursday was different. Oakes was outside the coffee shop and talking with a friend, but the jacket and cap were gone, replaced by the dress blues of the U.S. Marine Corps.

“I do this for Veterans Day, Memorial Day and Vietnam Veterans Day in March,” Oakes, a combat veteran of Vietnam, said.

He later became a fire team leader and then a squad leader.

He remembers two actions he participated in while assigned to the DMZ as a member of the 3rd Marine Division.

One was Operation Dewey Canyon, a plan to push units of the 6th and 9th North Vietnamese Army regiments from an area near the DMZ.

“My unit’s target was Tiger Mountain, and it had Bengal tigers on it and the NVA,” Oakes said.

The operation was seen as a success. According to the online history website History.Net, while 130 Marines were killed and 920 wounded, the Marines effectively disrupted a major enemy logistical center in an area known as Base Area 611, including in their total haul more than 1,000 NVA small arms, some 807,000 rounds of ammunition and about 220,000 pounds of rice.

Oakes participated in another operation to save some American prisoners of war, but the operation was unsuccessful.

His unit was later transferred to Okinawa, “Where we practiced beach landings, jungle combat training and close order drill.”

When he thinks about Veterans Day, Oakes said, “I think of the guys I lost; we lost seven men in our squad.”

He went to his cell phone and opened a photo of three men dressed in combat fatigues, “This was our corpsman, he was from the Navy, a machine gunner and our fire team leader.”

He then went to a photo of three names on the Vietnam Memorial; three people he knew in Kosciusko. He pointed to one name.

“He and I went to school together. He was killed in 1968, one year before I went to Vietnam,” he said.