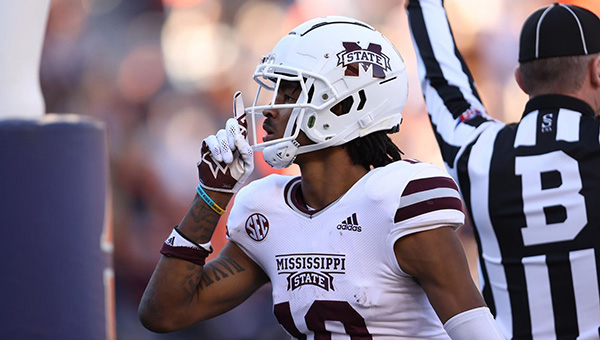 AUBURN, Ala. (AP) — Through 30 minutes of football on Saturday, Mississippi State was thoroughly dominated by No. 16 Auburn.

For the next 30 minutes, the Bulldogs did the dominating.

Will Rogers threw for 415 yards and six touchdowns, and Mississippi State overcame a 25-point deficit in its 43-34 victory over Auburn. Rogers’ touchdown total and the 25-point comeback are both school records.

Auburn (6-4, 3-3 Southeastern Conference) scored touchdowns on its first four possessions and led 28-3 midway through the second quarter. But Mississippi State (6-4, 4-3) scored 40 straight points behind Rogers’ arm, starting with a touchdown pass to Makai Polk late in the first half.

The largest deficit previously overcame in a State win was in this year’s season opener when the Bulldogs rallied from 20 points down to top Louisiana Tech.

“I think the biggest thing is that we didn’t get discouraged by the first half, which should have been easy to do,” Mississippi State coach Mike Leach said. “That first half, I thought we kind of played tentatively and played not to lose. Then we played aggressively. We played faster.”

Mississippi State was held to just one field goal on its first three drives. Then Rogers threw for his six touchdowns on the Bulldogs’ next seven drives. He only had three incompletions after the first quarter.

“I felt like we all were just doing a good job,” Rogers said of his second half. “The O-line did a good job of blocking. (Auburn) played a lot of man coverage today, and the receivers were doing a great job of getting off with their routes. It’s kind of crazy to think I completed that many, because some of those were contested. I’ve got to give a lot of credit to my receivers.”

Auburn’s offense got off to a strong start behind Bo Nix, who finished with 377 yards passing and two touchdowns. But, as the defense struggled to slow Mississippi State’s passing attack after halftime, the Tigers were held to 158 yards and six points in the second half.

Nix threw a 15-yard touchdown pass to Kobe Hudson to give the Tigers a 28-3 lead with 6:10 left in the second quarter. They did not score again until Tank Bigsby ran it in from one yard out with 3:37 to go in the game, making it 43-34 in favor of Mississippi State. Auburn had minus-14 rushing yards in the second half.

Auburn’s final drive ended when T.J. Finley was sacked by Tyrus Wheat and fumbled, with Mississippi State recovering at the Auburn 12-yard line. The Bulldogs had the ball inside the 10-yard line with another chance to score when time expired.

The win ensured a winning record away from home for Mississippi State. The Bulldogs have beaten two ranked opponents on the road, and their only two road losses came by a combined five points.
They are now bowl-eligible with two home games left in the season, next week against Tennessee State and on Thanksgiving night vs. Ole Miss.

“We try to keep the routine the same as it is at home,” Leach said. “You just try to focus on the work at hand and the job instead of a bunch of stuff you can’t control.”