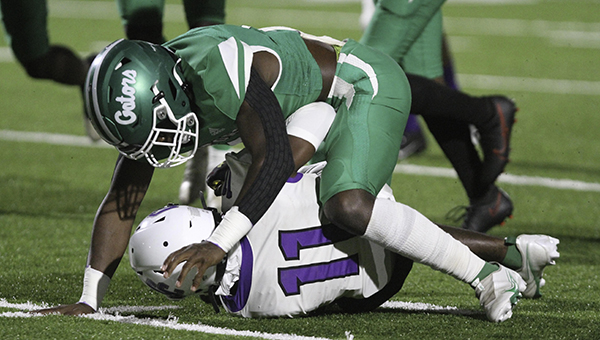 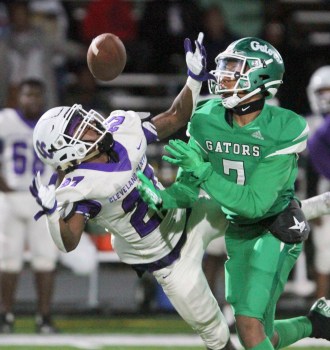 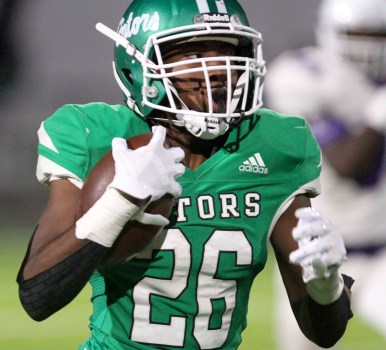 Vicksburg High running back Otis James carries the ball during Friday's playoff game against Cleveland Central. James rushed for 165 yards and three touchdowns to lead the Gators to a 25-3 victory. (Paul Ingram/For The Vicksburg Post) 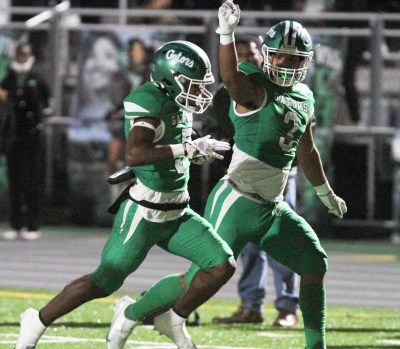 Vicksburg's Johnny Smith (5) is escorted to the end zone by teammate Julien Demby (3) on a 31-yard touchdown run in the first quarter of Friday's playoff game against Cleveland Central. (Paul Ingram/For The Vicksburg Post) 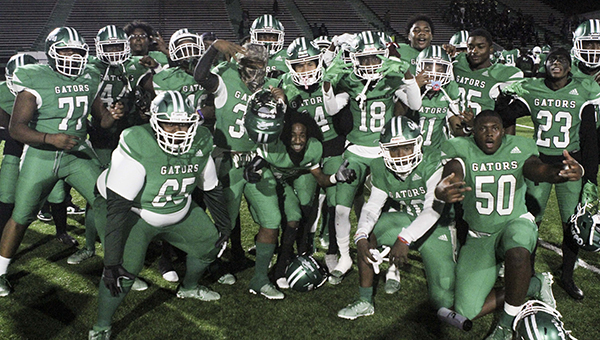 Vicksburg High football players celebrate after beating Cleveland Central, 25-3, in the first round of the MHSAA Class 5A playoffs on Friday. (Paul Ingram/For The Vicksburg Post)

The Vicksburg Gators won. They are far from done.

Otis James ran for 165 yards and three touchdowns — all in the second half — and Johnny Smith added 103 yards and a touchdown as the Gators routed Cleveland Central 25-3 on Friday in the first round of the MHSAA Class 5A playoffs.

Vicksburg (7-4) won a playoff game for the first time since 2008, and advanced to play West Point on the road in the second round next week. West Point beat Ridgeland 40-7 on Friday.

“It feels so good. For us to finish the season with seven wins — on record — it feels really good. This team beat us last year and we came out in dominating fashion. We ran the ball and did pretty much what we wanted to do,” Vicksburg coach Todd McDaniel said. “(Cleveland) is probably the biggest team we’ve played all year. But our kids were focused and they came out and said, ‘We’re practicing Monday.’ So I said, ‘Let’s roll, baby.’”

The Gators did roll, but it took a while to get going. They turned it over twice in the second quarter, had another drive end on downs in Cleveland Central territory, and went into halftime leading 6-3.

The Gators got the kickoff to start the second half, but committed two false start penalties before running a play. When they finally did snap it, James took a handoff up the middle, broke into the clear 10 yards past the line of scrimmage, and outran the defense for a 79-yard touchdown.

“We made a lot of mental errors in the second quarter. Then we came out of halftime and made three mental errors in a row, jumping offsides. I told them to just run the play like they’ve been doing all year, and they hit it for 70 or 80 yards,” McDaniel said. “I’m just happy about our kids doing a great job. It’s uncharted waters for this program.”

James’ touchdown was the spark the Gators needed to blow the game open. They punted after recovering a fumble on the next possession, but scored on the two after that. James scored on a 1-yard run late in the third quarter and a 12-yard run with 7:01 left in the fourth to make it 25-3.

Vicksburg finished the game with 299 rushing yards as a team. It had 176 in the second half.

“We’re a grind it out type of team. We wanted to come out here and just play our game,” McDaniel said. “They have a big, physical football team. It takes a while. But just like Novocaine, it always works.”

Smith was the primary runner in the first half, with 10 carries for 97 yards and a 31-yard TD. James took over that role in the second half, carrying it 11 times for 143 of his 165 yards.

“I want to give a big thanks to my O-line and Coach McDaniel. He made it all come together. Never give up. Just keep that mindset,” James said.

Although the offense posted its highest point total in three games, the real stars were on Vicksburg’s defense. Cleveland Central drove 67 yards for a field goal on the game’s opening possession and had 23 total yards and five first downs in the last 3 1/2 quarters.

The Gators registered three sacks — one each by Kellen Washington, Wallyeke Curry and Demarcus Johnson — and 12 tackles for loss.

“Our defense played lights out. They have been playing hard all year long. We’re pretty healthy on that side of the ball and Coach (Christopher) Lacey and the defensive staff is doing a wonderful job,” McDaniel said. “I just can’t say enough about those guys. They scored three points and our guys came to the sideline and said, ‘Coach, they ain’t scoring no more.’”

Now the Gators will turn their attention toward a much bigger challenge. West Point (9-0) has played in five consecutive Class 5A championship games and won four of them.

James was happy with the win, but said no one is losing sight of what it’ll take to play deeper into November.

“More work,” James said. “We’ve got to keep putting in the work. We’re not letting up on nothing. No play time. We’ve got to go straight to the work.”