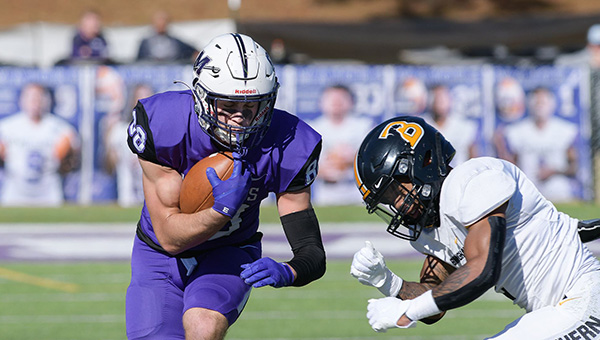 BATON ROUGE, La. — Shedeur Sanders threw two touchdown passes in the fourth quarter, including the game-winning 50-yarder to Malachi Wideman with 1:31 remaining, to give Jackson State a come-from-behind win over Southern University (4-6, 3-4 SWAC).

Sanders completed 24 of 31 passes for 260 yards and two touchdowns, but also threw two interceptions and was sacked three times.

Southern built a 17-7 lead through three quarters before Sanders led the Tigers’ comeback. He threw a 13-yard TD pass to Wideman with 5:42 remaining, and then the long game-winner a few minutes later. Wideman finished with four receptions for 81 yards.

Jerodd Simms ran for 98 yards and a TD for Southern. The Jaguars moved the ball to midfield on their final drive, but Shilo Sanders intercepted a pass from Glendon McDaniel with 19 seconds left to seal it.

Alcorn State 31, Prairie View A&M 29
Alcorn State still needs some help to get back to the Southwestern Athletic Conference championship game, but it did itself a lot of favors on Saturday.

The victory kept alive Alcorn’s chances of winning the SWAC Western Division championship. The Braves (6-4, 5-2 SWAC) must beat East Division leader Jackson State in the regular-season finale next weekend, and have Prairie View (7-2, 6-1) lose at home against Mississippi Valley State on Nov. 27. Prairie View plays a non-conference game at Texas A&M on Nov. 20.

After trailing 9-7 in the second quarter Saturday, Alcorn broke out to a 31-9 lead. Harper began the scoring binge with a 57-yard pass to Lecharles Pringle and capped it off with a 12-yard strike to Tavarious Griffin early in the third quarter.

Prairie View fought back with three touchdowns, two of them TD passes by Jawon Pass. After Pass connected with Trejon Spiller for a 70-yard score, Pass’ two-point conversion pass fell incomplete and Alcorn State led 31-29 in the fourth quarter.

The Panthers got the ball back with 5:18 remaining and drove inside Alcorn’s 20-yard line. On a third down play Barfield forced and recovered a fumble by Jaden Stewart at the 16-yard line with 18 seconds left.

Harper completed 18 of 28 passes for 263 yards, and Pringle had four receptions for 119 yards.

The Delta Devils answered with an 83-yard scoring pass from Eastman to Jarius Clayton and followed that with a 93-yard scoring toss to former Port Gibson star Jacory Rankin for a 31-24 lead after three quarters.

The Hornets, who have lost four straight, tied the game at 31 on a Nettles pass to Wallace Corker, but MVSU’s Thomas scored twice — on runs of 30 and 4 yards — in the last 3:48 to seal the win.

Mississippi Valley State (3-7, 2-5) broke a four game losing streak overall, and an 11-game streak against Alabama State dating back to 2008.

Cade Broussard returned an interception 75 yards for Millsaps’ only touchdown. It came with 3:35 left in the first half, and cut Birmingham-Southern’s lead to 28-7.

Mayowa Asagunla was 14-of-22 passing for 191 yards and two touchdowns for Belhaven. The Blazers rushed for 273 yards as a team, and held East Texas Baptist (5-5, 4-5 American Southwest Conference) to five rushing yards.

Smith-Moore was 3-of-6 passing for 119 yards, and ran for 117 yards and one touchdown. Marcus Williams had 113 yards and two touchdowns on 11 carries for the Choctaws.

Demetrius Battle carried the ball 26 times for 139 yards and one touchdown for West Alabama, and quarterback Jack McDaniels threw two touchdown passes. McDaniels connected with Owen Harper on a 10-yard touchdown with 4:16 left to put West Alabama ahead 24-21.

Former Warren Central star Lamar Gray had a team-high eight tackles for West Alabama, and also carried the ball once for 19 yards.

Delta State quarterback Patrick Shegog was 21-of-38 passing for 223 yards and one touchdown, a 41-yarder to Dohnte Meyers late in the third quarter. By then, West Georgia had scored 44 straight points to take firm control of the game. Shegog threw three interceptions.