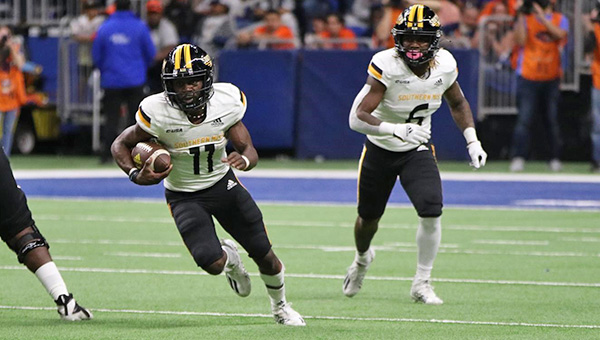 SAN ANTONIO (AP) — UTSA was nearly felled by the pressure of being overwhelming favorites. The defense prevented a truly upsetting defeat.

Frank Harris passed for 227 yards and two touchdowns, and ran for 54 yards as No. 15 UTSA overcame a sluggish performance to beat Southern Miss 27-17 on Saturday and remain undefeated.

“We kind of learned a lesson tonight,” Roadrunners safety Antonio Parks said. “I think this will help us and give us a boost in momentum the rest of the season.”

UTSA, Georgia and Cincinnati are the only remaining unbeaten FBS teams following No. 8 Oklahoma’s 27-14 loss at No. 13 Baylor.

The Roadrunners (10-0, 6-0 Conference-USA) needed late defensive stands to avoid an upset by the Golden Eagles (1-9, 0-6). They trailed 17-10 before scoring 17 unanswered points — set up by a fourth down stop and two turnovers — in the third and fourth quarter.

“We made a decision as a football program to milk the clock and try to reduce the game,” Southern Miss coach Will Hall said. “We told our kids we will be in the game in the fourth quarter, don’t let it catch you off guard and our kids weren’t caught off guard. We made one less play or maybe two.”

Favored by 33 1/2-point favorite, according to FanDuel Sportsbook, UTSA nearly became fully ensnared in a trap game if not for its defense.

UTSA sealed the victory with 4:25 remaining on a fumble recovery by Charles Wiley at the Southern Miss 9 after Corey Mayfield Jr. stripped Willis as he fled the pocket. Sincere McCormick scored on the ensuing play to give the Roadrunners a 27-17 lead.

UTSA had two fumble recoveries and an interception.

“That’s the only way you win championships,” Roadrunners coach Jeff Traylor said. “I’ve been blessed to win a few. Not once did we ever go through and look clean on offense every one of those game. Your defense has to get it down and they got it done tonight.”

McCormick rushed for 90 yards and a touchdown.

Southern Miss entered the game allowing 30.2 points per game but held UTSA to a single touchdown for much of the contest. The Golden Eagles had two interceptions, including a 34-yard touchdown return by Natrone Brooks on the second play of the second half to take a 17-10 lead.

Southern Miss started freshman Frank Gore Jr. at quarterback, which caught UTSA off guard defensively. The son and namesake of the New York Jets running back, Gore has started at running back all season and wasn’t listed at quarterback on the team’s depth chart entering the game.

Gore finished with 123 yards rushing and a touchdown on 20 carries and completed 2 of 3 passes for 33 yards before exiting the game in the second half with cramps and a lower leg injury. Willis, a redshirt freshman wide receiver, also took snaps. Willis was 2-for-4 passing for 19 yards and ran for 46 yards, although his two lost turnovers in the fourth quarter derailed the upset bid.

“It definitely shocked me when they came out and (Gore) throwing,” UTSA junior linebacker Rashad Wisdom said. “I wasn’t ready to see that that early, but the coaches did a great job adjusting throughout the whole game.”

A season-high crowd of 30,105 at San Antonio’s Alamodome did impact Gore and the Golden Eagles. After his first career completion on a 32-yard pass to the Roadrunners’ 2-yard line, the Golden Eagles had a false start, delay of game, bobbled snap and a fumbled snap that pushed them back to the 26-yard line. Briggs Bourgeois then missed a 37-yard field goal.

The Golden Eagles finished with 16 penalties for 88 yards, including seven false starts and five delay-of-game penalties.

“The crowd was amazing tonight,” Wisdom said. “From everyone who was out there and how loud it got. It really, really was an advantage as far as how many offsides penalties as they got. Being able to bust their communication and kind of taking them off their game.”