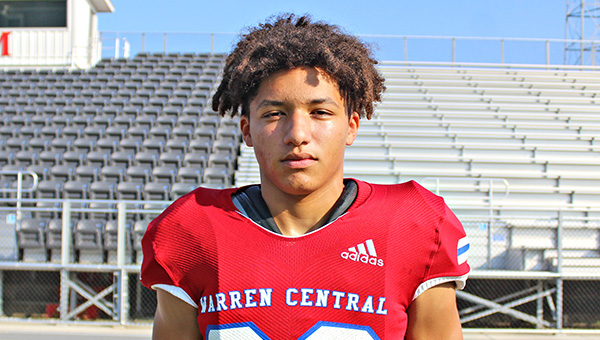 Warren Central kicker Brandon Gilliam made three field goals, from 30, 46 and 43 yards, to help the Vikings beat D'Iberville 30-21 in the first round of the MHSAA Class 6A playoffs on Friday.

T.J. Thompson ran for two touchdowns, Brandon Gilliam kicked three field goals — including a 43-yarder in the fourth quarter that gave Warren Central the lead for good — and the Vikings beat D’Iberville 30-21 in the first round of the MHSAA Class 6A playoffs on Friday.

It was the fifth win in a row for Warren Central (8-3), which lost its first three region games before getting on a roll that has carried it into the second round of the playoffs for the fifth time in seven seasons.

“It’s hard to explain. I haven’t been around too many runs like this,” Warren Central coach Josh Morgan said. “We’ve been undefeated for a long time, in certain aspects. But from going down one streak and getting on another one, that’s something that’s extremely hard to do is to turn those tides. Our coaching staff and our players were able to do that, and we’re a very dangerous ballclub right now.”

Warren Central will go on the road in the second round to play Region 3-6A champion Brandon (10-2) next week. Brandon beat Harrison Central 39-13 on Friday for its 10th consecutive win. One of those victories came against Warren Central in October.

“It don’t matter one bit,” Morgan said when asked about the rematch with Brandon. “We’re going to enjoy this over the weekend and come back in Monday and get another plan together. You don’t get to pick who you play. We played them earlier this year and they’re our district champs. That’s about all I can say on that. We’re definitely going to try and play better.”

Right now, the Vikings are certainly playing as well as anyone in the state.

D’Iberville (9-2) turned two turnovers into touchdowns, including a 4-yard run by Dreyuntae Lenoir early in the fourth quarter that tied the game at 21.

Jaylon Trisby returned the ensuing kickoff deep into D’Iberville territory, however, to set up Gilliam’s 43-yard field goal with 9:37 remaining.

Gilliam also hit from 30 and 46 yards in the first half, and has made at least one field goal in four of the last five games.

“In a playoff game, making those kinds of kicks is clutch. He was a big difference in the ballgame. These were elite kicks,” Morgan said.

D’Iberville fumbled near midfield on its next possession, and the Vikings recovered and took advantage of it. They drove down the short field to score on a 4-yard run by Mark Gray, giving them a 30-21 lead with 2:26 remaining.

“We were helping them do some things and they don’t need any help. But we’re a tough-minded team, a mentally tough team, a mature team and we were able to navigate through that and continue to battle,” Morgan said.

The Vikings were one of only two No. 3 or 4 seeds to go on the road and win in eight Class 6A playoff games on Friday. No. 4 seed Oxford upset Region 1-6A champion South Panola 35-28 in the North half of the bracket.
Morgan, though, said the Vikings never felt like underdogs.

“If you don’t believe in yourself, it’s overwhelming. Our guys expected to win this game. We didn’t feel like we were underdogs by any means,” Morgan said. “We knew we were going to have to play really well, and that was our attitude. We came to win. We traveled that way. It was a business trip for us, and that’s exactly what we were able to do was come down here and handle business.”