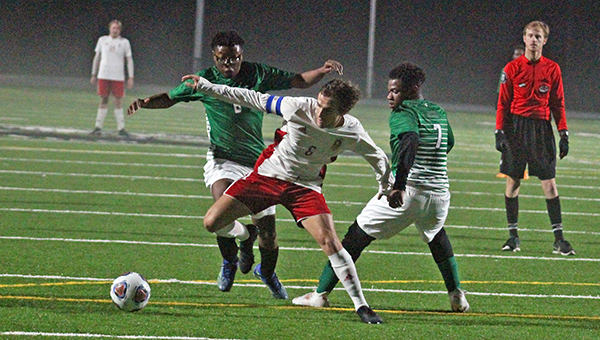 On Halloween weekend, the Friday night lights of football were joined by the Monday through Thursday night lights — and occasionally Saturday as well — of soccer and basketball.

From a sports media perspective, football season is a lightning-fast breeze. It lasts about three months, and each week of the season is like the chapter of a book. The weather might get a bit hot or cold on either end, but for the most part is pleasant. There are often a couple of days in the middle of the week to relax a bit.

The spring season is incredibly busy, but variety can be the spice of life. Baseball and softball are the meat and potatoes of the spring sports meal, while the side dishes of track, golf and tennis are yummy diversions when needed.
And then there’s winter.

It’s the second week of November, and both soccer and basketball are already two weeks into a season that lasts until February or March. Unlike the once-a-week cycle of football, games fill the calendar three or four times a week.

Trying to keep up with and cover them all is a grind that can beat you down, made worse by the onset of the scourge known as Standard Time. Games begin just as the sun sets at 5:30 p.m. and the normal workday should end. Forget dinner. There are several hours of work ahead. If soccer is on the menu, it’s several hours in temperatures only a penguin could love.

The first few weeks of the season are spent playing what amounts to exhibition games with partial rosters. Many teams aren’t at full strength until football season is over. Another wave of players joins and leaves around the Christmas holidays.

The process gives the season a disjointed feel. The first half is a work in progress, and the second a mad sprint to the playoffs.

A lot of this coincides with my own winter malaise. I’m a warm-weather person. I much prefer the sunlight and warmth of spring and summer to the cold darkness of winter. If I could hibernate like a grizzly bear from Nov. 1 to March 1, I might welcome it. Unfortunately, that’s not in the cards so all I can do is soldier on.

It feels appropriate that I’m finishing this column at 4:30 p.m. on a Thursday, just before heading out to cover a soccer game. The light outside the office window is fading, like a dwindling campfire or the final weeks of football season.

Winter is coming. Winter sports are here. I’ll trudge through it, but it doesn’t mean I have to like it.