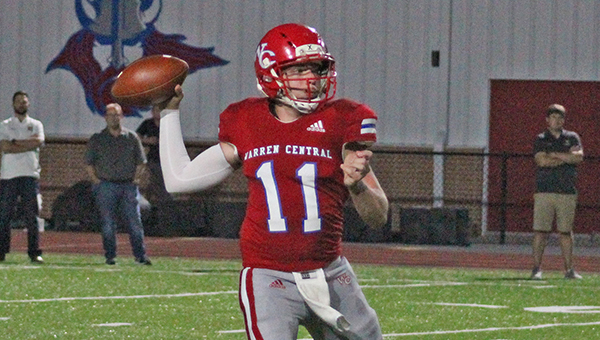 1
Warren Central had plenty of ups and downs in its playoff victory over D’Iberville on Friday, and Jack Wright was riding the wave for a lot of them.

The junior quarterback was sacked and fumbled in the first quarter, and D’Iberville returned it for a touchdown. He also threw an interception in the fourth quarter that led to a game-tying touchdown for the Warriors.

Wright also made several big plays that atoned for his miscues. He finished 13-of-19 passing for 172 yards and scored on a two-point conversion run in the third quarter.

Wright’s fumble gave D’Iberville a 7-0 lead midway through the first quarter, and he only completed two of his first six passes.

They went on to win 30-21 and advanced to play Brandon in the second round.

For the season, Wright has completed 79 of 134 passes (59 percent) for 1,163 yards, with nine touchdowns and three interceptions. He went more than 80 consecutive attempts without an interception at one point this season.

“We all have to be mentally tough and have a short memory. I thought, as a team, we were able to handle the rough spots and overcome, and stay together and go to the next play. (Wright) did a good job of that,” Warren Central coach Josh Morgan said. “The defense did a good job of giving him opportunities and the guys around him played well, too. Just that mentally tough part and being able to respond the right way, he did a good job with that.”

2
In early September, Briarfield Academy looked like a faded power. The Rebels, who won the MAIS Class 1A championship in 2017, 2019 and 2020, lost three of their first four games and narrowly escaped with their one victory.

In mid-November, however, they’re right back where they always seem to be.

Briarfield (8-4) advanced to the Class 1A championship game for the fourth time in five seasons by beating Riverdale 6-0 in last week’s semifinal. It will face DeSoto School (11-1) Thursday at 3 p.m. at Jackson Academy for the title.

If Briarfield wins, it will snap a tie with Tallulah Academy for the most 8-man championships since the MAIS started the division in 2007. Both schools have won three each.

DeSoto School is playing for its first 8-man championship. It won the Class 1A championship in 11-man football in 2008 and lost in the title game in 2009.

Regardless of who wins, it will be the seventh year in a row that a school from outside of Mississippi has won a title in the MAIS’ smallest classification. Briarfield, located in Lake Providence, La., and Tallulah Academy combined to win the last six. DeSoto School is located in West Helena, Ark.

The last time the MAIS did not have at least one non-Mississippi team in any of its championship games was 2003.

All of the MAIS championship games will be broadcast live online at maisnetwork.org.

3
Quarterbacks Matt Corral of Ole Miss and Will Rogers of Mississippi State will go head-to-head in what promises to be a high-scoring Egg Bowl on Thanksgiving night. A few days later they’ll do the same over dinner.

Corral and Rogers were among 10 finalists announced Monday for the C Spire Conerly Trophy, which is awarded annually to the top college football player in Mississippi. This year’s award will be presented Nov. 30, at a banquet at the Country Club of Jackson beginning at 6:30 p.m. Tickets are available online at msfame.com or by calling 601-982-8264.

Ole Miss wide receiver Elijah Moore, now an NFL rookie with the New York Jets, was the 2020-21 Conerly Trophy winner. The last player to win it that was not from Ole Miss or Mississippi State was Southern Miss quarterback Austin Davis in 2011.

4
Will Hall introduced a radical change to Southern Miss’ offense on Saturday and nearly pulled off the biggest upset of the college football season.

The Southern Miss coach switched up the team’s normal offense for one that used running back Frank Gore Jr. and wide receiver Antavious Willis at quarterback. The move did not lead to a lot of increased production — the Golden Eagles only had 137 net rushing yards and 189 total yards — but did keep them in the game until the very end before losing 27-17 to undefeated and 15th-ranked UTSA (10-0, 6-0 Conference USA).

Southern Miss held the ball for more than 37 minutes and led 17-10 late in the third quarter. UTSA forced a fumble and an interception from Willis in the fourth quarter and scored 17 unanswered points to pull out the win.

Gore and Willis are the seventh and eighth USM players to see playing time at quarterback this season. Three quarterbacks have suffered season-ending injuries, and two others were ineffective or benched. Freshman Jake Lange, who started the previous four games, did not play against UTSA.

Southern Miss (1-9, 0-6) lost its eighth game in a row. It has only scored more than 19 points once and ranks last among 130 FBS teams in total offense.

“Well, what else are you going to do? You know there ain’t a whole lot else. Kind of a last-ditch effort,” Hall said after Saturday’s game.

At his weekly news conference on Monday, Hall said he decided to make the switch after the previous week’s loss to North Texas. Although the lack of quarterbacks likely played a role, he also said it was an effort to help the team’s seniors find some late-season success.

“We got to the point, after the North Texas game where I just thought that we had to have some more life and some more juice and it was time to go down the stretch and give us a chance to win for these seniors and these older guys,” Hall said. “We’ve seen what we’re building, we’ve kind of got an idea, schematically, offensively, at what we can be and what we can become moving forward. And it just became a deal of with these older guys who are stuck in it, let’s give them a chance to win.”

Hall added that he not only plans to stick with the new scheme for the Golden Eagles’ last two games, he might expand the quarterback depth chart beyond Gore and Willis. Southern Miss plays at Louisiana Tech on Friday night (7 p.m. on CBS Sports Network) and finishes the season at home vs. Florida International on Nov. 27.

“Frank played well and he’s in treatment and we’ve got a lot of guys we’re going to play in there this week. Shoot, we might play six or seven of them back there,” Hall said. “Looking back on it, I probably should have had more people ready to play at that spot, more than just Frank and (Willis) and we’ll transition to that. We’ll play a bunch of people back there this week. It’ll be fun, it’ll look like the cavalry running in there.”