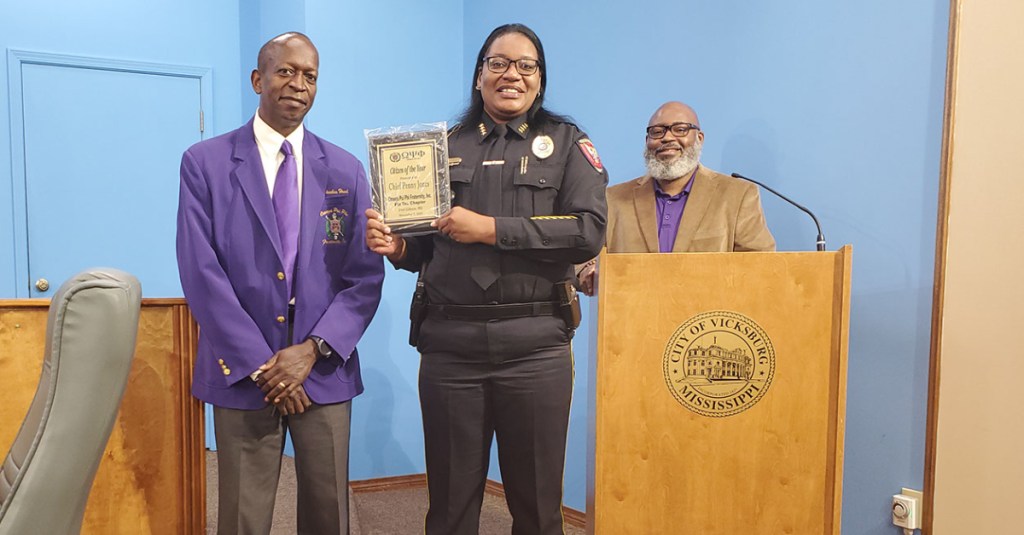 Vicksburg Police Chief Penny Jones, right, displays the plaque she received from the Eta Tau Chapter of Omega Psi Phi Fraternity in Port Gibson naming her the organization’s “Citizen of the Year” as Columbus Hood, chapter Basileus, looks on. (Photo by John Surratt | The Vicksburg Post)

When Vicksburg Police Chief Penny Jones attended Monday’s meeting of the Board of Mayor and Aldermen, she was expecting to give a presentation on the ankle monitors worn by criminal offenders out on bond.

She didn’t get to make the presentation. Instead, she received an award from the Eta Tau Chapter of Omega Psi Phi Fraternity in Port Gibson naming her the organization’s “Citizen of the Year.”

“Our citizen of the year is selected from outstanding citizens nominated by the members,” said Christopher Barnett, Mississippi state representative for the fraternity.

Nominees, he said, are people who are recognized “by a significant segment of society for outstanding contributions to the welfare of mankind.”

Barnett said Jones was selected for her work in the community, and for efforts like locating the police department’s mobile headquarters in different areas of the community.

“She was involved in a couple of speaking engagements at the mall, some of the organizations she belongs to,” he said regarding the reasons Jones received the award. “Just being active in the community and being transparent and approachable.

“Working to improving community relations, working with officials; just carrying out her duties above and beyond, ensuring we will be safe in our communities,” Barnett said.

“I very elated and thankful that they think enough of me and looked at my accolades to feel like that I deserve this award,” Jones said.